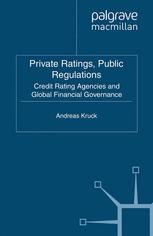 Credit rating agencies play a powerful and contentious role in the governance of global financial markets. Introducing an original framework for delegating political authority to private actors, this book explains common trends in the regulatory use of private ratings for public purposes and analyzes regulatory changes after the Financial Crisis.

'Kruck's effort contributes to a better understanding of the changing role of the state and the diffusion of political authority. Those

benefit from his research [...] an important contribution to the study of global economy.'

'The text's primary benefit is that it is accessibly written and offers a straightforward introduction to the specialized topic of credit rating agencies and the collaboration of public and private actors in governance more generally. Further, Kruck provides the valuable reminder that there is no singular Capitalism existing in the world today but, rather, many nuanced expressions of this economic and political system that act and react differently to market forces. He also exposes readers to a healthy crop of new terms disintermediation, transsovereignty, homo oeconomicus that excite creative possibilities about the study of economic systems at the very level of language.'