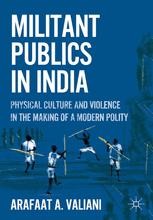 Physical Culture and Violence in the Making of a Modern Polity

Offers readers a telling glimpse of the social world in which militants are made, explaining how group physical training and technico-ethical experiments with it have created a powerful religious nationalist movement in Gujarat that has been held responsible for carrying out spectacular episodes of ethnic cleansing against Indian minorities.

Arafaat A. Valiani is Associate Professor in the Department of History at the University of Oregon, USA.

'In this remarkable book, Valiani looks at the horrific 'saffron' violence of Gujarat in 2002 squarely in the eye and sets out to understand through first-hand encounters with participants how disciplined physical training not only makes tragedy possible but also shapes moral dispositions, new forms of sociality, and civic engagement. In the archival-based historical chapters, he shows us the roots of this training in the nationalist movement and the permeability between Gandhian practice and the violence of the Hindu Right. This absorbing study is a major contribution to understanding modern political life in India.' Barbara D. Metcalf, author of Husain Ahmad Madani: The Jihad for Islam and India's Freedom (2009) and president of the American Historical Association (2010)

'Valiani draws on rich and extensive fieldwork to theorize a series of unexpected links between Mahatma Gandhi, bodily self-fashioning, and performative politics with erudition and verve. He attributes contemporary Hindu nationalism, and the violence of contemporary electoral politics in India more generally, to the unintended (and unacknowledged) outcome of these elements. This is a bold intervention in the debates on democratization that will reward its readers with a distinctive and illuminating interpretation of the persistence of Hindu nationalism in western India.' Arvind Rajagopal, professor of Media Studies and affiliated faculty in the Departments of Sociology and Social and Cultural ANALYSIS, New York University and author of Politics After Television: Hindu Nationalism and the Reshaping of the Public in India

'Subtle yet powerful. By demonstrating the ways that physical training is embedded within local communities and the meanings that therefore adhere to such practices, Valiani enables us to come away with a much different understanding of how and why communal violence occurs. This has dramatic implications for those who seek to combat communal violence, as well as for those interested in collective violence in contexts other than India.' Lisa Mitchell, assistant professor of South Asia Studies, University of Pennsylvania and author of language, Emotion, and Politics in South India: The Making of a Mother Tongue

"Valiani's timely and important study of Hindu militancy in western India provides invaluable background for understanding the communal violence in Gujarat of recent decades. Valiani gives us an unprecedented look at the way Hindu nationalist movements have linked physical training and discipline with religious mobilization and organization. His nuanced and wide-ranging historical ethnography not only contextualizes the rise of communal violence in India, it affords an astonishing inside view of the way the movement inducts and shapes its trainees." - Nicholas B. Dirks, Franz Boas Professor of Anthropology and History and executive vice president for Arts and Sciences, Columbia University