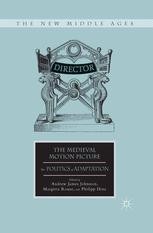 The Politics of Adaptation

Providing new and challenging ways of understanding the medieval in the modern and vice versa, this volume highlights how medieval aesthetic experience breathes life into contemporary cinema. Engaging with the subject of time and temporality, the essays examine the politics of adaptation and our contemporary entanglement with the medieval.

Andrew James Johnston is Chair of Medieval and Renaissance English Literature at the Freie Universität Berlin, Germany, and author of Performing the Middle Ages from Beowulf to Othello.

"The question of how various forms of art, discourse, and structure manage to negotiate the distance between various non-contiguous periods of history is at the heart of all medievalism studies. The contributors to The Medieval Motion Picture confront the issue of temporality by claiming, and demonstrating, for cinematic representations of medieval culture a joyous multimodality of temporal and aesthetic layers apt to adapt medieval artifacts, concepts, and practices to the diverse horizons of expectation postmedieval viewers bring to medievalist movies. From Kurosawa's Ran to HBO's Game of Thrones, the essays in this theoretically sophisticated volume reveal the complex dialogic interplay of pre-modern and (post)modern temporalities." - Richard Utz, Chair and Professor in the School of Literature, Media, and Communication, Georgia Institute of Technology, USA

"This ambitious collection explores the ideas and practices that link medievalism studies, adaptation theory and cinema studies. The 'politics' of adaptation here are institutional and disciplinary: these original and inventive essays show how far medievalism has developed from earlier preoccupations with fidelity to sources or to the historical past. Using the temporal uncertainties of medieval film as a starting-point, many of these essays offer brilliant insights into the nature of cinematic representation." - Stephanie Trigg, Professor of English, University of Melbourne, Australia.

"With an eye to film's global purview, including Hollywood films set in various geographies and 'medieval' pasts, as well as to international cinema, the editors cast a wide theoretical net and reel in numerous illuminating insights into the nature and aesthetics of cinema that turns to the misty pasts of medievalism. Johnston, Rouse, and Hinz's The Medieval Motion Picture lays out exemplary readings that will enhance theoretical discussions of the cinematic Middle Ages, particularly in its focus on the temporal nature of adaptations, while also putting forth intriguing interpretations of a range of films, from masterpieces (Ran) to blockbuster successes (The Sixth Sense) to schlock (Timeline). Scholars of these films will benefit from the volume's detailed readings of them." - The Medieval Review