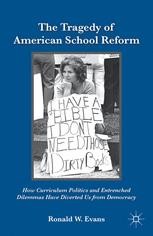 The Tragedy of American School Reform

How Curriculum Politics and Entrenched Dilemmas Have Diverted Us from Democracy

Two persistent dilemmas haunt school reform: curriculum politics and classroom constancy. Both undermined the 1960s' new social studies, a dynamic reform movement centered on inquiry, issues, and social activism. Dramatic academic freedom controversies ended reform and led to a conservative restoration. On one side were teachers and curriculum developers; on the other, conservative activists determined to undo the revolutions of the 1960s. The episode brought a return to traditional history, a turn away from questioning, and the re-imposition of authority. Engagingly written and thoroughly researched, The Tragedy of American School Reform offers a provocative perspective on current trends.

"A good, richly documented history of the turbulent period of school reform, with particular emphasis upon the social sciences, and the frequently vengeful conservative reaction with which we are living up to the present day. I have lived through much of the period that Evans documents so skillfully and can personally attest to both the optimistic and frequently calamitous story he has given us." -Jonathan Kozol, award-winning author of Death at an Early Age, Savage Inequalities: Children in America's Schools, and Amazing Grace: The Lives of Children and the Conscience of a Nation

"In The Tragedy of American School Reform, Ron Evans confronts the failure of American society to critically examine the purposes of education. Through a meticulous examination of the Social Studies curriculum, he makes clear why current reforms are not likely to succeed, in light of 'curriculum politics' and the largely uncritical 'constancy' of our teaching methods and content. An important contribution to the current debate." - Eugene F. Provenzo, Jr., University of Miami

"Evans' extensive knowledge of education history helps the reader understand that, for the past century, the American classroom has been a battleground for the ideological direction of our nation. He tells the story of education reform as though he was tracking the movements of a winding river and makes the reader aware of the various liberal and conservative tributaries, cross currents, eddies, rip-tides, and white water that have an unavoidable effect on any vessel navigating in the stream. He also makes it clear that, for now and for the foreseeable future, liberal and conservative ideologues will continue to battle for control of the boat's helm." - Trey Kay, producer of the award-winning radio documentary The Great Textbook War

"The Tragedy of American School Reform is an excellent and well-researched contribution by one of our finest historians of American social studies education - of American education period. Ron Evans' insights into the powerful and constraining political and social forces that inhibit meaningful and democratic school reform should be read by everyone interested in social studies and in the present state of schooling. In today's increasingly restrictive climate of standards-based reform and high-stakes testing, no book could be more timely or more relevant." - Kevin D. Vinson, University of the West Indies