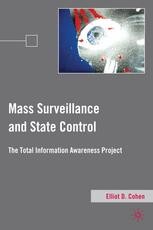 This book details the factors contributing to the degenerative trend of mass, warrantless government surveillance which imperils civil liberties, and specifies recommendations for constructive change. It also provides a platform for grassroots efforts to stop the decline before it is too late.

ELLIOT D. COHEN is Professor and Chair of the Department of Humanities at Indian River State College, USA and Adjunct Professor of Clinical Ethics in the College of Medicine at Florida State University, USA.

"In our increasingly connected world, our daily patterns of behavior on issues important and trivial, both public and personal, are increasingly open to surveillance and observation by those we allow and those we might not. As Elliot D. Cohen explores in his interesting new book, when talking about the government role in this space, we've moved past the question of 'can' and into the realm of 'should?' Ignorance is no longer an option on this crucial topic, as the debate Cohen explores cuts to the heart of rights and notions of good citizenship in the twenty-first century." - Peter W. Singer, Senior Fellow and Director, 21st Century Defense Initiative, The Brookings Institution

"In Mass Surveillance and State Control, Elliot D. Cohen delivers a masterpiece of academic research, documentation, and understanding. His central thesis is that people's personal liberty and privacy are under siege by a powerful network of transnational political, corporate, media, and military elites, who are seeking nothing less than total domination of the world. To achieve that end these power elites are using national security and the global war on terror to develop total informational awareness systems on every person in the world and to effectively manage news and information. Cohen warns of a web of deception and authoritarian tendencies so serious that a moral social movement enforcing universal privacy protection and human rights has become immediately necessary. This book should be read and discussed by democratic activists and civil liberty supporters from all political persuasions." - Peter Phillips, President, Media Freedom Foundation/Project Censored

"A compelling and scary account of the growing corporate and governmental control over our lives and of what needs to be done in order to stop the continuing erosion of our civil and political liberties. A wakeup call for us all." - James P. Sterba, University of Notre Dame

"On one level, Elliot D. Cohen's Mass Surveillance and State Control is an indictment of several governmental policies, those concerned with the war on terror, media concentration, and law enforcement more generally. On another level, however, this book is a study of several new technologies - both software and hardware - that are only now taking shape. The study poses in considerable detail at least two important questions of professional ethics for software engineers, computer scientists, and other "technologists": 1) how much of this technology (such as the "global firewall") may they work on, and 2) how much do their professional codes of ethics limit what can be built into (or left out of) what they do work on?" - Michael Davis, Senior Fellow, Center for Study of Ethics in the Professions, Illinois Institute of Technology