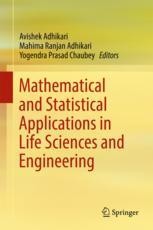 Mathematical and Statistical Applications in Life Sciences and Engineering

The book includes articles from eminent international scientists discussing a wide spectrum of topics of current importance in mathematics and statistics and their applications. It presents state-of-the-art material along with a clear and detailed review of the relevant topics and issues concerned. The topics discussed include message transmission, colouring problem, control of stochastic structures and information dynamics, image denoising, life testing and reliability, survival and frailty models, analysis of drought periods, prediction of genomic profiles, competing risks, environmental applications and chronic disease control. It is a valuable resource for researchers and practitioners in the relevant areas of mathematics and statistics.

AVISHEK ADHIKARI, M.Sc. (Gold Medalist), PhD from the Indian Statistical Institute, assistant professor at the Dept of Pure Mathematics, University of Calcutta, and founder secretary of the IMBIC, India is a recipient of the President of India Medal and Young Scientist Award. He was a post-doctoral fellow at INRIA-Rocquencourt, France and a visiting scientist at Linkoping University, Sweden. He visited, on invitation, many institutions in India, Japan, Sweden, France, England, Switzerland and South Korea. His main interests are in cryptology, combinatorics, and algebra and its applications. He has published four textbooks on mathematics including Basic Modern Algebra with Applications (Springer) and edited one research monograph. He has published numerous papers in respected international journals, conference proceedings and contributed volumes. He is on the editorial board of several journals.

MAHIMA RANJAN ADHIKARI, PhD, founder president of the Institute IMBIC, India and former professor of Pure Mathematics at the University of Calcutta, is a recipient of the Gold medal. He has published several research papers and eight textbooks including Basic Modern Algebra with Applications and Basic Algebraic Topology and its Applications (both with Springer). He was elected president of the Mathematical Science Section (including Statistics) of the 95th Indian Science Congress, 2008. He has successfully guided several PhD students in 9 different areas of mathematics. He has visited several institutions in India, USA, UK, China, Japan, France, Greece, Sweden, Switzerland, Italy and many other countries on invitation. YOGENDRA PRASAD CHAUBEY, PhD, is professor of Statistics at the Department of Mathematics and Statistics at Concordia University, Montreal, Canada. His research interests include sampling, linear models, distribution theory and nonparametric smoothing. His current research, funded by the Natural Sciences and Engineering Research Council of Canada’s discovery grant program, is focused on the nonparametric functional estimation. He has served on the editorial board of several statistical journals and is an elected member of the International Statistical Institute. He has edited three research monographs and published over 130 research articles in several international statistical journals, conference proceedings and book chapters.
Show all