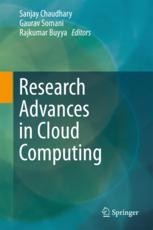 This book addresses the emerging area of cloud computing, providing a comprehensive overview of the research areas, recent work and open research problems. The move to cloud computing is no longer merely a topic of discussion; it has become a core competency that every modern business needs to embrace and excel at. It has changed the way enterprise and internet computing is viewed, and this success story is the result of the long-term efforts of computing research community around the globe. It is predicted that by 2026 more than two-thirds of all enterprises across the globe will be entirely run in cloud. These predictions have led to huge levels of funding for research and development in cloud computing and related technologies.

Accordingly, universities across the globe have incorporated cloud computing and its related technologies in their curriculum, and information technology (IT) organizations are accelerating their skill-set evolution in order to be better prepared to manage emerging technologies and public expectations of the cloud, such as new services.

Dr. Sanjay Chaudhary is a Professor and Associate Dean of the School of Engineering and Applied Science, Ahmedabad University, Ahmedabad, India. His research areas are data analytics, cloud computing, and ICT applications in agriculture and rural development. He has authored four books, six book chapters, and published more than hundred research papers and ten literary articles in international conferences, workshops, and journals. He has served on the program committees of leading international conferences and workshops, and he is also a member of the review committees of leading journals. He holds a doctorate degree in computer science from Gujarat Vidyapeeth, Ahmedabad, India. Earlier, he worked as a Professor and Dean (Academics Programs) at DA-IICT. He has also worked on various large-scale software development projects for the corporate sector, co-operative sector, and government organizations. He is actively involved in various consultancy and enterprise application development projects.

Gaurav Somani is an Assistant Professor at the Department of Computer Science and Engineering at the Central University of Rajasthan (Ajmer), India. He has submitted his PhD in Computer Science and Engineering from MNIT, Jaipur, India. His research interests include distributed systems, network security, cloud computing, and open-source technologies. He has published number of papers in various conferences and journals of international repute and is a reviewer of many top journals. Some of his top papers are published in highly reputed journals such as Computer Networks, Annals of Telecommunications, Computer Communications, IEEE Cloud Computing, Computers and Electrical Engineering, FGCS, and IEEE Cloud. He has written a book on “Scheduling and Isolation in Virtualization” which is published by VDM Verlag Dr. Muller Publishers, Germany. This book is used as a text/reference book in some graduate-level programs across the globe. He is also a part of multiple international conferences across the globe where he has played a role of TPC member, session chair, and invited speaker. He was the keynote and the tutorial chair at the ICISS 2016. He is a member of IEEE and ACM.

Dr. Rajkumar Buyya is a Redmond Barry Distinguished Professor of Computer Science and Software Engineering and Director of the Cloud Computing and Distributed Systems (CLOUDS) Laboratory at the University of Melbourne, Australia. He is also serving as the founding CEO of Manjrasoft, a spin-off company of the university, commercializing its innovations in cloud computing. He served as Future Fellow of the Australian Research Council during 2012–2016. He has authored over 525 publications and seven text books including ``Mastering Cloud Computing'' published by McGraw Hill, China Machine Press, and Morgan Kaufmann for Indian, Chinese, and international markets, respectively. He has also edited several books including ``Cloud Computing: Principles and Paradigms''(Wiley Press, USA, Feb 2011). He is one of the highly cited authors in computer science and software engineering worldwide (h-index=112, g-index=245, 63,900+citations). Microsoft Academic Search Index ranked Dr. Buyya as #1 author in the world (2005–2016) for both ﬁeld rating and citations evaluations in the area of Distributed and Parallel Computing. Recently, Dr. Buyya is recognized as “2016 Web of Science Highly Cited Researcher” by Thomson Reuters.

“This book includes recent research trends in cloud computing. It covers a wide range of research topics, some of which will be of interest to cloud users and others to cloud vendors.” (Seon Yeong Han, Computing Reviews, August 08, 2019)