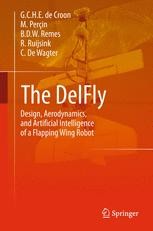 Design, Aerodynamics, and Artificial Intelligence of a Flapping Wing Robot

This book introduces the topics most relevant to autonomously flying flapping wing robots: flapping-wing design, aerodynamics, and artificial intelligence. Readers can explore these topics in the context of the "Delfly", a flapping wing robot designed at Delft University in The Netherlands.

How are tiny fruit flies able to lift their weight, avoid obstacles and predators, and find food or shelter? The first step in emulating this is the creation of a micro flapping wing robot that flies by itself. The challenges are considerable: the design and aerodynamics of flapping wings are still active areas of scientific research, whilst artificial intelligence is subject to extreme limitations deriving from the few sensors and minimal processing onboard.

The combination of introductions to relevant fields, practical insights and scientific experiments from the DelFly project make this book a must-read for all flapping wing enthusiasts, be they students, researchers, or engineers.

Guido de Croon: Received his M.Sc. and Ph.D. in the field of Artificial Intelligence (AI) at Maastricht University, the Netherlands. His research interest lies with computationally efficient algorithms for robot autonomy, with a particular focus on computer vision. Since 2008 he has worked on algorithms for achieving autonomous flight with small and light-weight flying robots, such as the DelFly. In 2011-2012, he was a research fellow in the Advanced Concepts Team of the European Space Agency, where he studied topics such as biologically inspired algorithms for extraterrestrial landing scenarios and where he introduced “Astro Drone”, the first scientific crowd sourcing experiment gathering robotic data. Currently, he is assistant-professor at the Micro Air Vehicle lab (MAV-lab) of Delft University of Technology.

Mustafa Perçin: Obtained his B.Sc. degree in Aeronautical Engineering from Istanbul Technical University in 2007, ranking first among the graduating class of 2007 in the university. In 2009, he received his M.Sc. degree in Aeronautical- Astronautical Engineering from Istanbul Technical University with the thesis titled "Flow around a plunging airfoil in a uniform flow". Subsequently, he obtained a research master at the von Karman Institute for Fluid Dynamics in 2010. He started his Ph.D. research in the Aerospace Engineering Faculty of Delft University of Technology in 2011. He received his Ph.D. degree with the thesis titled "Aerodynamic mechanisms of flapping flight" in September 2015. His research interests are flapping and fixed wing aerodynamics, and experimental fluid mechanics (non-intrusive flow measurement techniques).

Bart Remes:  Received his M.Sc. in Aerospace Engineering at the Technical University of Delft on the topic of Aerospace for Sustainable Engineering and Technology. He then joined the Aerospace Software and Technologies Institute and was involved in the design and construction of various Micro Air Vehicles, such as the DelFly II and the DelFly Micro. Both these Micro Air Vehicles (MAVs) have won multiple awards including a mentioning as the “Smallest Camera Airplane, DelFly Micro” in the Guiness Book of records, 2009. Currently, he is project manager at the Micro Air Vehicle lab. Besides flapping wing MAVs, he has worked on hybrid air vehicles and the design of the smallest open source autopilot in the world, the “Lisa S”, a 2x2 cm device.

Rick Ruijsink: Obtained his M.Sc. in aeronautical engineering at Delft University of Technology and graduated in theoretical and wind tunnel research of propellers for UAVs. After a professional life in automotive aerodynamics at Volvo Car, he has worked as an independent aerodynamic consultant since 1994. He has designed and flown many competition model aircraft up to world championship level. In addition, he designed, produced and marketed the first micro-size multichannel proportional rad

io gear to be used in indoor flying model aircraft in the beginning of the ’90s, breaking the ground for the current Micro Air Vehicles. Since 2005 he has been working part-time for the MAV-lab of Delft University as a technology integrator. He is a key member of the NATO AVT 184 on flapping wing technology.

Christophe De Wagter: Received his Master of Science in Aerospace Engineering at the Delft University of Technology on the topic of vision based control in 2004. In 2005 he initiated the Micro Air Vehicle Lab and has continued working as a researcher since then. His areas of interest range from control theory and sensor fusion to computer vision and electronics. In parallel he has been working as freelance developer for local startup companies. His model and private pilot skills , experience in electronics, embedded firmware and flight control contribute to many of the Micro Air Vehicle Lab projects. Together with other members of the MAV-lab he received many awards, including the 1st prize for “Best Fully Autonomous Indoor MAV” at the EMAV 2008 in Braunschweig, to the 1st place in the outdoor competition at the IMAV 2013, Toulouse, with a swarm of 12 autonomous drones.