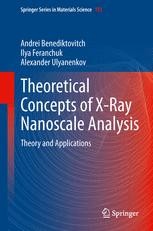 This book provides a concise survey of modern theoretical concepts of X-ray materials analysis. The principle features of the book are: basics of X-ray scattering, interaction between X-rays and matter and new theoretical concepts of X-ray scattering. The various X-ray techniques are considered in detail: high-resolution X-ray diffraction, X-ray reflectivity, grazing-incidence small-angle X-ray scattering and X-ray residual stress analysis. All the theoretical methods presented use the unified physical approach. This makes the book especially useful for readers learning and performing data analysis with different techniques. The theory is applicable to studies of bulk materials of all kinds, including single crystals and polycrystals as well as to surface studies under grazing incidence. The book appeals to researchers and graduate students alike.

Andrey Benediktovich is working at the department of Theoretical Physics, Belarusian State University, Minsk, Belarus. Since several years he takes a part in joint projects with Bruker AXS, which are dedicated to the development of modern analytical methods for X-ray data analysis. He also collaborates with Siegen University (Germany) for theoretical simulation of the X-ray diffraction processes occured at X-ray Free Electron Lasers.

Ilya Feranchuk is a Chair and Professor of the Theoretical Physics Department at Belarusian State University. He recieved his PhD (1975) and DSc (1985) in theoretical physics at the same university. In the early seventies he was a first discover of the parametric X-ray radiation, and next decades was involved in studies on this effect. In 2002 he was awarded by a State Prize of Belarus for investigation of PXR. Last decade he is focused on analytical X-ray scattering methods (HRXRD, XRR, GISAXS, etc) used in modern nanoscience and semiconductor industries as well as conducts the fundamental researches of interaction of X-rays with crystalline, polycrystalline and amorphous materials.

Alex Ulyanenkov received his PhD (1991, title “Operator method for description of quantum systems in periodic fields”) and D.Sc. (2007, title: "Non-perturbative methods for microscopic description of coherent processes during the interaction of charged particles and x-rays with crystals and nanostructures") in Physics from Belarusian State University. His present scientific activity includes the studies of X-ray scattering from nanostructures, thin solid films, semiconductor multilayers and superlattices, porous matter, large molecules and proteins. He is Managing Director of Rigaku Europe SE, the part of Rigaku Corporation, one of the world leaders in the production of X-ray analytical instruments. Within the recent decades, he was working at Potsdam University, later at Science University of Tokyo, Japan, and for Bruker AXS GmbH.