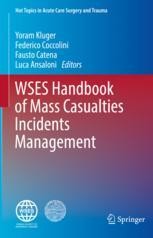 This manual, written by world opinion leaders in the field, is designed to provide readily accessible, step-by-step guidance on all aspects of the management of mass casualty incidents. Readers will find a wealth of helpful practical suggestions as well as information on the latest relevant scientific advances and their implications. Globally, mass casualty incidents are becoming more frequent even in unexpected places. There is a need for a dependable manual suitable for use by all who must be prepared to face mass casualty incidents, including practicing physicians, surgeons, anesthesiologists, nurses, and administrators. This book meets that need. It is the first practical manual to be devoted to the topic, and its portable format will allow it to be kept in the pocket at all times, ready for immediate consultation. The innovative nature of much of the content and the inclusion of up-to-date literature reviews ensure that the manual will remain relevant for years to come.

Yoram Kluger, MD is the chief of the division of general surgery and the medical director of the pancreatic surgery service at Rambam Health Care Campus. He is Associate Professor of Medicine at the Technion-Israel Institute of Technology’s Ruth & Bruce Rappaport Faculty of Medicine. He was recently appointed chairman of the Department of Surgery at the Faculty of Medicine. Dr. Kluger received his MD from the Hebrew University Hadassah Medical School (1980) Jerusalem and completed his general surgery residency at Hadassah Medical Center. He further trained in surgery at the Allegheny Medical Center in Pittsburgh, PA, USA. Dr. Kluger was the founder and director of the Rabin Trauma Center at Tel Aviv Medical Center and the first in Israel to establish a dedicated hospitalization center for patients with multiple injuries. He is recognized worldwide for his research on medical preparedness and medical infrastructure management in mass casualty situations. Dr. Kluger's main interests are surgical oncology and trauma surgery. He holds a position on the board of the World Society of Emergency Surgery and is the Israeli delegate to the European Society for Emergency Surgery and Trauma. Dr. Kluger has published more than 220 scientific papers.

Fausto Catena, MD , PhD, FRCS, is currently chief of the Emergency and General Surgery Department, Parma University Hospital, Italy. Until 2011, he worked as a consultant general surgeon at the Dept. of General, Emergency and Transplant Surgery at the St Orsola-Malpighi University Hospital, Bologna, Italy, and since 2012 he has been a fellow of the Royal College of Surgeons, UK. He is editor-in-chief of the World Journal of Emergency Surgery, general secretary of the World Society of Emergency Surgery, and past president of ESYS- European College of Surgeons. He has written more than 600 scientific papers, 22 book chapters and 5 Books. He has also received various U.S. and international prizes.

Luca Ansaloni, MD, is currently director of the General, Emergency and Trauma Surgery Dept. of Bufalini Hospital in Cesena (Italy) and Professor at the  Milan University’s General and Emergency Surgery Residency  School. He has extensive experience in managing post-traumatic and non-post-traumatic open abdomen patients, and as a war surgeon in Africa and Afghanistan. He has authored hundreds of scientific articles and book chapters. He is past- president of the World Society of Emergency Surgery (WSES).