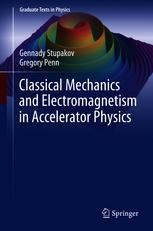 This self-contained textbook with exercises discusses a broad range of selected topics from classical mechanics and electromagnetic theory that inform key issues related to modern accelerators.

Part I presents fundamentals of the Lagrangian and Hamiltonian formalism for mechanical systems, canonical transformations, action-angle variables, and then linear and nonlinear oscillators. The Hamiltonian for a circular accelerator is used to evaluate the equations of motion, the action, and betatron oscillations in an accelerator.  From this base, we explore the impact of field errors and nonlinear resonances.  This part ends with the concept of the distribution function and an introduction to the kinetic equation to describe large ensembles of charged particles and to supplement the previous single-particle analysis of beam dynamics.

Part II focuses on classical electromagnetism and begins with an analysis of the electromagnetic field from relativistic beams, both in vacuum and in a resistive pipe.  Plane electromagnetic waves and modes in waveguides and radio-frequency cavities are also discussed.  The focus then turns to radiation processes of relativistic beams in different conditions, including transition, diffraction, synchrotron, and undulator radiation. Fundamental concepts such as the retarded time for the observed field from a charged particle, coherent and incoherent radiation, and the formation length of radiation are introduced. We conclude with a discussion of laser-driven acceleration of charged particles and the radiation damping effect.

Appendices on electromagnetism and special relativity are included, and references are given in some chapters as a launching point for further reading.

This text is intended for graduate students who are beginning to explore the field of accelerator physics, but is also recommended for those who are familiar with particle accelerators but wish to delve further into the theory underlying some of the more pressing concerns in their design and operation.

Dr. Gennady Stupakov is a Senior Scientist at SLAC National Accelerator Laboratory in Menlo Park, CA, USA. After graduation from Novosibirsk State University in 1975 with specialization in plasma physics, he worked at Budker Institute of Nuclear Physics in Novosibirsk where he earned his Candidate of Sciences and Doctor of Sciences degrees. At the same time he taught various physics courses at Novosibirsk University where he held a position of professor of physics.
In 1991 Dr Stupakov moved to the US to join the Superconducting Super Collider laboratory in Waxahachie, TX, and in 1994 he joined SLAC. His scientific interests cover a broad range of topics in accelerator physics, including collective effects in  beam dynamics and theory of free electron lasers. He has more than tree hundred papers published in peer reviewed journals and conference proceedings.  He regularly teaches various accelerator physics courses at the US Particle Accelerator Schools.
Gregory Penn received his PhD in Physics in 1998 from the Massachusetts Institute of Technology.  After a postdoctoral position at the University of California, Berkeley, he was a scientific associate at CERN in 2002-2003. He has been at Lawrence Berkeley National Lab since 2004, first in the Center for Beam Physics and currently in the Accelerator Modeling Program.  He has done research on plasmas, accelerator beam physics, free electron lasers, and laser-plasma interactions.