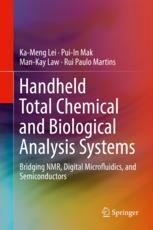 The book Handheld Total Chemical and Biological Analysis Systems: Bridging NMR, Digital Microfluidics, and Semiconductors centers on the complete design of Nuclear Magnetic Resonance (NMR) microsystems for in vitro chemical and biological assays based on semiconductor chips and portable magnet. Different sensing mechanisms for CMOS in vitro assay are compared, key design criteria of the CMOS transceiver for NMR measurement are revealed, and system-level optimizations of the CMOS NMR platform utilizing digital microfluidic and diverse functions of the CMOS technology are discussed. Two CMOS NMR platforms are implemented, each of these focuses on different aspect of optimization.

Ka-Meng Lei (S’12-M’17) received the B.Sc. degree in electrical and electronics engineering, and graduated from Honours College from University of Macau (UM), Macao in 2012. He completed his Ph.D. degree in the State-Key Laboratory of Analog and Mixed-Signal VLSI (SKL-AMSV) and Faculty of Science and Technology – ECE, UM in 2016. He is currently working as a lecturer in the same laboratory under the “Macao Fellow” program at UM. Since Jun. 2017, he has been a postdoctoral fellow (visiting) at Harvard University, John A. Paulson School of Engineering and Applied Sciences.

Dr. Lei worked as a trainee at Evatronix IP, Gliwice, Poland in the summer of 2012. He was a research assistant in SKL-AMSV to work on CMOS micro-NMR biosensor, and will continue the development of it with the Harvard University.

He has published 13 referred papers (6 in scientific journals & 7 in conference proceedings) as well as 2 US patents. His research interests include sensors and analog front-end interfaces, analog circuit techniques for micro-NMR, intelligent digital microfluidics platform, and multidisciplinary design of biomedical devices.

Pui-In Mak (Elvis) (S’00-M’08-SM’11) received the B.Sc. (’03) and Ph.D. (’06) degrees from the University of Macau (UM), where he is currently Full Professor at the Faculty of Science and Technology - ECE; Associate Director (Research) and Research Line Coordinator (Wireless and Biomedical) at the State-Key Laboratory of Analog and Mixed-Signal VLSI.

He held a visiting position at the University of Cambridge, UK (’09), INESC-ID, Portugal (’09) and University of Pavia, Italy (’10). His research focuses are on circuits and systems for wireless and multidisciplinary innovations.

Prof. Mak has published 90+ journal and 120+ conference papers, and holds 20+ US patents (issued/filed). He co-authored a number of books/book chapters: Analog-Baseband Architectures and Circuits for Multistandard and Low-Voltage Wireless Transceivers (Springer’07), High-/Mixed-Voltage Analog and RF Circuit Techniques for Nanoscale CMOS (Springer’12) and Ultra-Low-Power and Ultra-Low-Cost Short-Range Wireless Receivers in Nanoscale CMOS (Springer’16), and Enabling the Internet of Things - from Integrated Circuits to Integrated Systems (Springer’17).

Man-Kay Law (M’11-SM’16) received the B.Sc. degree in Computer Engineering and the PhD degree in Electronic and Computer Engineering from Hong Kong University of Science and Technology (HKUST), in 2006 and 2011, respectively. He joined HKUST as a Visiting Assistant Professor in 2011, and is currently an Associate Professor with the State Key Laboratory of Analog and Mixed-Signal VLSI, Faculty of Science and Technology, University of Macau, Macao.

Dr. Law’s research interests are on the development of ultra-low power sensing circuits and integrated energy harvesting techniques for wireless and biomedical applications.

He has authored and co-authored over 70 technical journals and conference papers and holds 5 U.S. patents.

He was a co-recipient of the ASQED Best Paper Award (2013), A-SSCC Distinguished Design Award (2015) and ASPDAC Best Design Award (2016). He also received the Macao Science and Technology Invention Award (2nd Class) by Macau Government - FDCT (2014). He currently serves as a member in the ISSCC Technical Programme Committee, and the IEEE CAS committee on Sensory Systems as well as Biomedical Circuits and Systems.

Rui P. Martins (IEEE Member'88– Senior Member'99 –Fellow'08), born in April 30, 1957, received the Bachelor (5-years), the Masters, and the Ph.D. degrees, as well as the Habilitation for Full-Professor in electrical engineering and computers from the Department of Electrical and Computer Engineering, Instituto Superior Técnico (IST), TU of Lisbon, Portugal, in 1980, 1985, 1992 and 2001, respectively. He has been with the Department of Electrical and Computer Engineering (DECE) / IST, TU of Lisbon, since October 1980.

Since 1992, he has been on leave from IST, TU of Lisbon (now University of Lisbon since 2013), and is also with the Department of Electrical and Computer Engineering, Faculty of Science and Technology (FST), University of Macau(UM), Macao, China, where he is currently a Chair-Professor since August 2013. In FST he was the Dean of the Faculty from 1994 to 1997 and he has been Vice-Rector of the University of Macau since 1997.

From September 2008, after the reform of the UM Charter, he was nominated after open international recruitment, and reappointed (in 2013), as Vice-Rector (Research) until August 31, 2018. Within the scope of his teaching and research activities he has taught 21 bachelor and master courses and, in UM, has supervised (or co-supervised) 40 theses, Ph.D. (19) and Masters (21). Co-authored: 6 books and 12 book chapters; 25 Patents, USA (23) & Taiwan (2); 400 papers, in scientific journals (126) and in conference proceedings (274); as well as other 62 academic works, in a total of 505 publications. He was a co-founder of Chipidea Microelectronics (Macao) [now Synopsys] in 2001/2002, and created in 2003 the Analog and Mixed-Signal VLSI Research Laboratory of UM, elevated in January 2011 to State Key Laboratory of China (the 1st in Engineering in Macao), being its Founding Director.