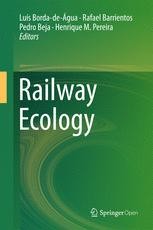 The book is divided into two major parts: Part one offers a general review of the major conceptual and theoretical principles of railway ecology. The chapters consider the impacts of railways on wildlife populations and concentrate on four major topics: mortality, barrier effects, species invasions and disturbances (ranging from noise to chemical pollution). Part two focuses on a number of case studies from Europe, Asia and North America written by an international group of experts.

Luís Borda-de-Água is a researcher in ecology and conservation biology at CIBIO-InBIO, University of Porto (Portugal), collaborating with the Infraestructuras de Portugal Biodiversity Chair. He completed his PhD in ecology at Imperial College, London, UK, having previously studied electrical engineering and physics. His background has led him to work mainly on theoretical and computational aspects of ecology. Presently he divides his research activity between studies on global biodiversity patterns and the impacts of linear infrastructures on wildlife.

Pedro Beja is a senior researcher in ecology and conservation biology at CIBIO-InBIO, University of Porto (Portugal), where he has held the EDP Chair in Biodiversity since 2012, and leads the ApplEcol—Applied Population and Community Ecology research group. He has over 25 years of professional experience, and has worked in public administration, private environmental consultancy, academia, and research institutions. His main research interests are in the area of biodiversity conservation in human-dominated landscapes, including agricultural, forest and freshwater systems. He has published over one hundred scientific papers on a variety of topics related to the conservation and management of biodiversity in Europe, Africa and South America.

Rafael Barrientos is a conservation biologist who received his PhD in 2009. He has a background in the impacts of linear infrastructures on wildlife, including roadkills, collision with power lines and the genetics of fragmented populations. He has participated in several management projects, for instance from the Spanish National Parks Autonomous Agency, OAPN. He has also participated in purely research projects in Spanish institutions like the Arid Zones Experimental Station, the National Museum of Natural History or the University of Castilla-La Mancha. Since 2015 he has held a postdoctoral position at the Infraestructuras de Portugal Biodiversity Chair at CIBIO-InBIO, Universidade do Porto (Portugal).

Henrique Pereira is a leading expert on global biodiversity change. He has worked both as a researcher and as a practitioner, having served as the director of Peneda-Gerês National Park and as the coordinator of the Portugal Millennium Ecosystem Assessment. Since 2013, he has been the Professor of Biodiversity Conservation at iDiv—German Center for Integrative Biodiversity Research at the Martin Luther University Halle-Wittenberg and invited professor at InBio, Universidade do Porto (Portugal). He is the Chair of the Biodiversity Observation Network of the Group on Earth Observations and co-chair of the Expert Group on Scenarios and Models from the Intergovernmental Platform on Biodiversity and Ecosystem Services. He has published over one hundred scientific papers and reports on biodiversity issues

“Railway Ecology is well written and provides the reader with an interesting, succinct description of the current state of knowledge concerning railway ecology. ... I highly recommend this book for those interested in the effects of any type of linear infrastructure.” (Sean P. Boyle, Biological Conversation, January, 2018)