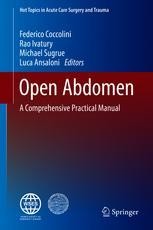 This book is the first available practical manual on the open abdomen. Practicing physicians, surgeons, anesthesiologists, nurses, and physiotherapists will find in it a ready source of information on all aspects of open abdomen management in a wide variety of settings. The coverage includes, for example, the open abdomen in trauma, intra-abdominal sepsis, and acute pancreatitis, step-by-step descriptions of different techniques with the aid of high-quality color figures, guidance on potential complications and their management, and features of management in different age groups. The book contents illustrate the most recent innovations and drawing upon a thorough and up-to-date literature review. Useful tips and tricks are highlighted, and the book is designed to support in daily decision making. The authors include worldwide opinion leaders in the field, guaranteeing the high scientific value of the content.

Rao Ivatury, MD, is Professor Emeritus at Virginia Commonwealth University (Richmond, Virginia, USA). He used to be Chair of the Division of Trauma, Critical Care, and Emergency Surgery at the VCU Medical Center. He has been involved in the “open abdomen and abdominal compartment syndrome in trauma and sepsis” for more than two decades and was one of the earliest pioneers, as documented by his impressive and pivotal scientific output. He was a Vice-President of the American Association of Surgery of Trauma and is a past President of the Panamerican Trauma Society (PTS) and the World Society of Abdominal Compartment Syndrome (WSACS). He was co-editor of the monograph Abdominal Compartment Syndrome and  is the author of more than 300 scientific publications. He is the current executive director of PTS.

Michael Sugrue, MD, was appointed Professor of Surgery at the University of New South Wales and Liverpool Hospital in Sydney in 2005, after working there as a specialist surgeon for 15 years. He was a founder of the World Society of Abdominal Compartment Syndrome (WSACS) and a former President of the organization. He has received many awards for his dedication to and achievements in medical education and research, including the prestigious ESR Hughes Award from the Australasian College of Surgeons in 2008. He has established surgical training courses in many countries, including Canada, Portugal, Spain, Singapore, Thailand, and New Zealand. Currently he is employed as a surgeon in Letterkenny Hospital, Donegal, and Galway University Hospital. He is secretary of the Donegal Clinical Academy Trust.

Luca Ansaloni, MD, is director of the General, Emergency and Trauma Surgery Dept. of Bufalini Hospital in Cesena (Italy) and Professor at the  Milan University’s General and Emergency Surgery Residency  School. He has extensive experience in managing post-traumatic and non-post-traumatic open abdomen patients, and as a war surgeon in Africa and Afghanistan. He has authored hundreds of scientific articles and book chapters. He is past- president of the World Society of Emergency Surgery (WSES).