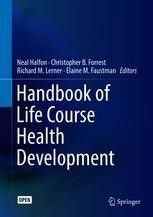 ​This handbook synthesizes and analyzes the growing knowledge base on life course health development (LCHD) from the prenatal period through emerging adulthood, with implications for clinical practice and public health. It presents LCHD as an innovative field with a sound theoretical framework for understanding wellness and disease from a lifespan perspective, replacing previous medical, biopsychosocial, and early genomic models of health. Interdisciplinary chapters discuss major health concerns (diabetes, obesity), important less-studied conditions (hearing, kidney health), and large-scale issues (nutrition, adversity) from a lifespan viewpoint.  In addition, chapters address methodological approaches and challenges by analyzing existing measures, studies, and surveys. The book concludes with the editors’ research agenda that proposes priorities for future LCHD research and its application to health care practice and health policy.

Topics featured in the Handbook include:

Neal Halfon, M.D., M.P.H., is the director of the UCLA Center for Healthier Children, Families and Communities. He is also a professor of pediatrics in the David Geffen School of Medicine at UCLA, of health policy and management in the UCLA Fielding School of Public Health, and of public policy in the UCLA Luskin School of Public Affairs. Dr. Halfon’s research has spanned clinical, health services, epidemiologic and health policy domains. For more than a decade, he has worked with national, state and local initiatives aimed at improving early childhood systems. Dr. Halfon has also played a significant role in developing new conceptual frameworks for the study of health and health care, including the Life Course Health Development (LCHD) framework. In 2006Halfon received the Academic Pediatric Associations Annual Research Award for his life time contributions to child health research.  He received his M.D. at the University of California, Davis, and M.P.H. at University of California, Berkeley. He completed his pediatric residency at UC San Diego and UC San Francisco. Dr. Halfon was also Robert Wood Johnson Clinical Scholar at UC San Francisco.

Christopher Forrest, M.D., Ph.D., is Professor of Pediatrics and Health Care Management at the Children’s Hospital of Philadelphia (CHOP) and the University of Pennsylvania. He is the Director of the CHOP Center for Applied Clinical Research, which uses life course health development science to adva^5 million children) that conducts patient-centered outcomes research among children and youth. He is the Chair of the Research Committee for PCORnet, the national clinical research network funded by PCORI. He also chairs the Steering Committee for the NIH program called PEPR, which is conducting longitudinal studies on person-reported outcome measures in children with chronic conditions. Dr. Forrest received his BA and MD degrees from Boston University and completed his PhD in Health Policy and Management at Johns Hopkins School of Public Health.

Richard M. Lerner, Ph.D., is the Bergstrom Chair in Applied Developmental Science and the Director of the Institute for Applied Research in Youth Development at Tufts University. He went from kindergarten through Ph.D. within the New York City public schools, completing his doctorate at the City University of New York in 1971 in developmental psychology. Dr. Lerner has more than 700 scholarly publications, including 80 authored or edited books. He was the founding editor of the Journal of Research on Adolescence and Applied Developmental Science, which he continues to edit. He was a 1980-81 fellow at the Center for Advanced Study in the Behavioral Sciences and is a fellow of the American Association for the Advancement of Science, the American Psychological Association, and the Association for Psychological Science. Dr. Lerner is known for his theory of relations between life-span human development and social change and for his research about the relations between adolescents and their peers, families, schools, and communities. His work integrates the study of public policies and community-based programs with the promotion of positive youth development and youth contributions to civil society. He is married to Dr. Jacqueline V. Lerner, Professor in the Department of Applied Developmental and Educational Psychology in the Lynch School of Education at Boston College. They live in Wayland, Massachusetts. They have three children, Justin, a director and screen writer living in Los Angeles, Blair, an advertising executive at Media Contacts in Boston, and Jarrett, a novelist and editor living in Boston.

Elaine M. Faustman, Ph.D., DABT, is Professor in the Department of Environmental and Occupational Health and Director of the Institute for Risk Analysis and Risk Communication at the School of Public Health and Community Medicine at the University of Washington. She directs the NIEHS and EPA funded Center for Child Environmental Health Risks Research and led the Pacific Northwest Center for the National Children’s Study. She is an elected fellow of both the American Association for the Advancement of Science and the Society for Risk Analysis. Dr. Faustman is an affiliate professor in the School of Public Affairs at the University of Washington and has been an affiliate Professor in the Department of Engineering and Public Policy at Carnegie-Mellon University. She has served on the National Toxicology Program Board of Scientific Counselors, the National Academy of Sciences Committee on Toxicology, the Institute of Medicine Upper Reference Levels Subcommittee of the Food and Nutrition Board, and on numerous editorial boards. Dr. Faustman chaired the National Academy of Sciences Committee on Developmental Toxicology. She has or is currently serving on the executive boards of the Society of Toxicology, the Society for Risk Analysis and NIEHS Council. She is past President of the Teratology Society. Her research interests include understanding mechanisms that put children and the public at risk from environmental agents. Currently she is serving on the Committee on NAS Gulf War and Health, Volume 11: Generational Health Effects of Serving in the Gulf War. In particular, Dr. Faustman is interested in the molecular and cellular mechanisms of developmental and reproductive toxicants, characterizing in vitro techniques for developmental toxicology assessment, and development of biologically based dose-response models for non-cancer risk assessment. Dr. Faustman’s research expertise includes development of decision-analytic tools for communicating and translating new scientific findings into risk assessment and risk management decisions.