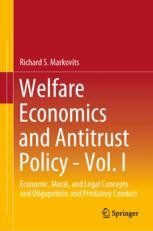 Economic and Moral Concepts and Oligopolistic and Predatory Conduct

This book is Volume I of a two-volume set on antitrust policy, analyzing the economic efficiency and moral desirability of various tests for antitrust legality, including those promulgated by US and EU antitrust law.

The overall study consists of three parts. Part I (Chapters 1-8) introduces readers to the economic, moral, and legal concepts that play important roles in antitrust-policy analysis. Part II (Chapters 9-16) analyzes the impacts of eight types of conduct covered by antitrust policy and various possible government responses to such conduct in terms of economic efficiency, the securing of liberal moral rights, and the instantiation of various utilitarian, non-utilitarian-egalitarian, and mixed conceptions of the moral good. Part III (Chapters 17-18) provides detailed information on US antitrust law and EU competition law, and compares the extent to which—when correctly interpreted and applied—these two bodies of law could ensure economic efficiency, protect liberal moral rights, and instantiate various morally defensible conceptions of the moral good.

This first volume contains Part I and the first two chapters of Part II of the overall study—the two chapters that focus on oligopolistic and predatory conduct of all kinds, respectively. The book will appeal to undergraduate and graduate students of economics and law who are interested in welfare economics, antitrust legality and the General Theory of the Second Best.

​Richard S. Markovits has a Ph.D. in economics from the London School of Economics and an L.L.B. from Yale Law School (USA).  His research covers competition theory, pricing theory, the theory of vertical integration and its contractual surrogates, economics and the interpretation and application of US and EU antitrust law, the definition and moral and legal relevance of the impact of a choice on economic efficiency, second-best theory (the third-best-economically-efficient protocol for analyzing economic efficiency), the economic efficiency of various specific judicial doctrines and pieces of legislation, jurisprudence, constitutional law, and the abstract definition and concrete moral and legal entailments of liberalism. He currently holds the John B. Connally Chair in Law at the University of Texas Law School (Austin, USA). He has taught in several other law schools and economics faculties in both the United States and Germany.  From 1981-1983, he was Co-Director of the Centre for Socio-Legal Studies at Wolfson College, Oxford. He has been a Fellow of the Wissenschaftskolleg zu Berlin and a Guddenhein Fellow, has served on panels of the US National Science Foundation and the UK Social Science Research Council, and has been a Trustee of the Law & Society Association.