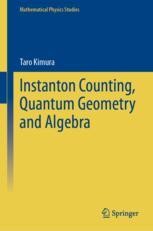 This book pedagogically describes recent developments in gauge theory, in particular four-dimensional N = 2 supersymmetric gauge theory, in relation to various fields in mathematics, including algebraic geometry, geometric representation theory, vertex operator algebras. The key concept is the instanton, which is a solution to the anti-self-dual Yang–Mills equation in four dimensions.

In the first part of the book, starting with the systematic description of the instanton, how to integrate out the instanton moduli space is explained together with the equivariant localization formula. It is then illustrated that this formalism is generalized to various situations, including quiver and fractional quiver gauge theory, supergroup gauge theory. The second part of the book is devoted to the algebraic geometric description of supersymmetric gauge theory, known as the Seiberg–Witten theory, together with string/M-theory point of view. Based on its relation to integrable systems, how to quantize such a geometric structure via the Ω-deformation of gauge theory is addressed. The third part of the book focuses on the quantum algebraic structure of supersymmetric gauge theory. After introducing the free field realization of gauge theory, the underlying infinite dimensional algebraic structure is discussed with emphasis on the connection with representation theory of quiver, which leads to the notion of quiver W-algebra. It is then clarified that such a gauge theory construction of the algebra naturally gives rise to further affinization and elliptic deformation of W-algebra.

Professor Taro Kimura is Maître de Conérences (Assistant Professor) working at Mathematical Physics group of Institut de Mathématiques de Bourgogne, Université Bourgogne Franche-Comté (UBFC), France. Before moving to UBFC, he has been Postdoctoral Researcher at RIKEN, CEA Saclay, then Research Associate, Junior Faculty Member, at Keio University. He obtained his Ph.D. degree in Theoretical/Mathematical Physics at the University of Tokyo in 2012 and then obtained the habilitation in 2020 at UBFC.

His research interest lies in theoretical physics/mathematical physics. In particular,  he is mainly exploring quantum field theory, and its mathematical aspects and applications.