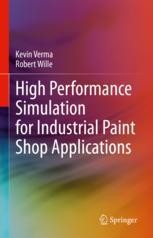 This book describes the current state of the art for simulating paint shop applications, their advantages and limitations, as well as corresponding high-performance computing (HPC) methods utilized in this domain. The authors provide a comprehensive introduction to fluid simulations, corresponding optimization methods from the HPC domain, as well as industrial paint shop applications. They showcase how the complexity of these applications bring corresponding fluid simulation methods to their limits and how these shortcomings can be overcome by employing HPC methods. To that end, this book covers various optimization techniques for three individual fluid simulation techniques, namely grid-based methods, volumetric decomposition methods, and particle-based methods.

Kevin Verma received his bachelor's and master's degree in Embedded Systems from the University of Applied Sciences Upper Austria, Hagenberg, Austria in 2013 and 2015, respectively. In 2020, he received his PhD in Computer Science from the Johannes Kepler University Linz, Linz, Austria. His research interests include High Performance Computing, Computational Fluid Dynamics and modeling and simulation of complex applications. In this area, he has published several papers in journals, international conferences and peer-reviewed workshops.