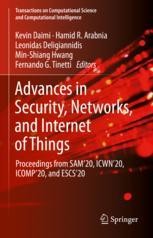 Advances in Security, Networks, and Internet of Things

Professor Kevin Daimi received his Ph.D. from the University of Cranfield, England.  He has a long work experience in academia and industry.  His industry experience includes working as Senior Programmer/Systems Analyst, Computer Specialist, and Computer Consultant. He is currently Professor of Computer Science and Software Engineering at the University of Detroit Mercy. His research interests include Computer and Network Security with emphasis on vehicle network security, Software Engineering, Data Mining, and Computer Science and Software Engineering Education.  He has published a number of papers on vehicle security. Two of his publications received the Best Paper Award from two international conferences. He is the editor of Computer and Network Security Essentials book, which was published by Springer. He has been chairing the annual International Conference on Security and Management (SAM) since 2012. Kevin is a Senior Member of the Association for Computing Machinery (ACM), a Senior Member of the Institute of Electrical and Electronic Engineers (IEEE), and a Fellow of the British Computer Society (BCS). He served as a Program Committee member for many international conferences and chaired some of them.  He is also the recipient of the Outstanding Achievement Award in Recognition and Appreciation of his Leadership, Service and Research Contributions to the Field of Network Security, from the 2010 World Congress in Computer Science, Computer Engineering, and Applied Computing (CSCE).

Professor Hamid R. Arabnia received a Ph.D. degree in Computer Science from the University of Kent (England) in 1987. He is currently a Professor Emeritus of Computer Science at University of Georgia, USA, where he has been since October 1987. His research interests include parallel and distributed processing techniques & algorithms, supercomputing, Data Science, imaging science, and other compute intensive problems. Applications of interest include: medical imaging and security. Most recent activities include: Studying ways to promote legislation that would prevent cyber-stalking, cyber-harassment, and cyber-bullying. As a victim of cyber-harassment and cyber-bullying, in 2017 he won a lawsuit with damages awarded to him for a total of $2.3 Million and $656K attorney costs. Since this court case was one of the few cases of its kind in the United States, this ruling is considered to be important; Final Judgement for damages was issued in Leon County Courthouse of Tallahassee in Florida by Circuit Court Judge. Prof. Arabnia is Editor-in-Chief of The Journal of Supercomputing (Springer). He is also on the editorial and advisory boards of 30 other journals. He is the book series editor-in-chief of "Transactions of Computational Science and Computational Intelligence" (Springer). He has won 12 distinguished awards, including the "Outstanding Research Contributions to the Field of Supercomputing" (President of IEEE/SMC) and "Distinguished Research Award" for Outstanding Contributions to Adaptable Communication Systems (ACM SIGAPP IMCOM). Dr. Arabnia is Fellow and Advisor of Center of Excellence in Terrorism, Resilience, Intelligence & Organized Crime Research (CENTRIC). He has been a PI/Co-PI on about $8 Million externally funded projects, about $200K internally funded projects, and about $4 Million equipment grants. During his tenure as Director of Graduate Programs, Dr. Arabnia secured the largest level of funding in the history of the department for supporting the research and education of graduate students (PhD, MS). Dr. Arabnia has delivered a number of keynote and plenary lectures at international conferences; most recently at: The 14th IEEE International Conference on Parallel and Distributed Systems (ICPADS, Australia); International Conference on Future Generation Communication and Networking (FGCN / IEEE CS, Sanya); The 10th IEEE International Conference on High Performance Computing and Communications (HPCC, Dalian); and ACM IMCOM International Conference. He has also delivered a number of "distinguished lectures" at various universities and research units/centers (USA, Spain, South Korea, Japan, Iran, Saudi Arabia, UK, Canada, Turkey, China, Ireland, Australia, ...); his distinguished lectures were funded and sponsored by US Department of Defense, SERSC of Republic of Korea, US National Science Foundation, H2020 of Europe, and others. Dr. Leonidas Deligiannidis is a Professor of Computer Science at Wentworth Institute of Technology in Boston, MA. His foundation in Computer Science was first established when he earned his B.S. from Northeastern University College of Computer Science. He then went on to obtain two advanced degrees in the field from Tufts University. He has been active in the field since then, investigating subjects like Brain Computer Interfaces, Security, Business-oriented visualizations, and STEM Education. He has also served in industrial positions outside the scope of his academic work, using his acumen for several companies. His industry experience includes both entrepreneur startups in healthcare and high-tech networking companies. He has received multiple awards for his efforts, including multiple Achievement Awards for his contributions to Imaging Science by the World Congress in Computer Science, Computer Engineering, and Applied Computing, IEEE best paper awards, as well as a University Presidential award for his scholarly achievements. In addition, he has served as a referee for many journals in computer science and is a member of the program and organizing committees for notable conferences in his field. Min-Shiang Hwang received the B.S. in electronic engineering from the National Taipei Institute of Technology, Taipei, Taiwan, in 1980; the M.S. in industrial engineering from the National Tsing Hua University, Taiwan in 1988; and the Ph.D. degree in computer and information science from the National Chiao Tung University, Taiwan in 1995. He also studied applied mathematics at the National Cheng Kung University, Taiwan, from 1984-1986. He passed the National Telecommunication Special Examination in field "information engineering", qualified as the first class advanced technician in 1990. From 1988 to 1991, he was the leader of the Computer Center at Telecommunication Laboratories, Ministry of Transportation and Communications. He was also the Chairman of the Department of Information Management, Chaoyang University of Technology (CYUT), Taiwan, during 1999-2002. He was a professor and Chairman of the Graduate Institute of Networking and Communications, CYUT, during 2002-2003. He was a professor and Chairman of the Department of Management Information Systems, NCHU, during 2003-2009. He was also a visiting professor with University of California (UC), Riverside and UC. Davis (USA) during 2009-2010. He was a distinguished professor of the Department of Management Information Systems, NCHU, during 2007-2011. He obtained the 1997, 1998, 1999, 2000, and 2001 Excellent Research Award of National Science Council (Taiwan). Dr. Hwang was a dean of College of Computer Science, Asia University (AU), Taichung, Taiwan. He is currently a chair professor with the Department of Computer Science and Information Engineering, AU, and an Editor-In-Chief of International Journal of Network Security (EI Compendex). He is a chairman of Sina Smart Computing Institute. His current research interests include cryptography, blockchain technology, steganography, network and communication security, and AI security. Dr. Hwang has published over 200+ articles on the above research fields in international journals. Fernando G. Tinetti has a PhD in Computer Science and is a Professor at Facultad de Informatica, Universidad Nacional de La Plata, La Plata, Argentina. He is also a researcher of the Comision Investigaciones Cientificas de la Provincia de Buenos Aires, Argentina. He is a recipient of the NSF-TCPP Early Adopter Award, NSF/IEEE-TCPP, Curriculum Initiative on Parallel and Distributed Computing. He is the author/co-author of more than one hundred papers in International Journals and Computer Science Conferences. His areas of interest and experience include: High Performance Computing, Parallel and Distributed Computing, Cloud and Edge Computing, Real-Time Systems and Applications, Big Data Processing, Data Center and Infrastructure Performance Evaluation, Robotic Systems and Applications. He has co-edited a number of books in HPC.
Show all