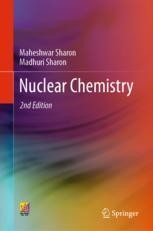 This book is designed to serve as a textbook for core courses offered to postgraduate students enrolled in chemistry. This book can also be used as a core or supplementary text for nuclear chemistry courses offered to students of chemical engineering. The book covers various topics of nuclear chemistry like Shell model, fission/fusion reaction, natural radioactive equilibrium series, nuclear reactions carried by various types of accelerators. In addition, it describes the law of decay of radioactivity, type of decay, and interaction of radiation with matter. It explains the difference between ionization counter, scintillation counter and solid state detector. This book also consists of end-of-book problems to help readers aid self-learning. The detailed coverage and pedagogical tools make this an ideal textbook for postgraduate students and researchers enrolled in various chemistry and engineering courses. This book will also be beneficial for industry professionals in the allied fields.

Late Prof. Maheshwar Sharon obtained Postgraduate Advance Diploma in Nuclear Power from Strachclyde University, Glasgow (1962); Postgraduate Diploma (Radiochemistry), Leicester Polytechnic (1964) and Ph.D. from Leicester University (1967). At Manchester University and Bolton Institute of Technology, he was a Postdoctoral Fellow where he studied (n, y) reactions using University Research Thermal Reactor at Risely, UK. After a brief spell at Himachal and Pune Universities, respectively, he joined as a Professor in Chemistry at IIT, Bombay, in 1978 and retired in 2003. Thereafter he joined Birla College, Kalyan, as an Adjunct Professor and started a Nanotechnology Research Center. He was awarded Prof. Emeritus (CSIR) 2003–2005. He was awarded Professor Emeritus by the UGC. He had been awarded the Man of the Year 1990, 1992, 1994 and 1996 by AB Inc, USA and was a Fellow of Royal Society of Chemistry, London (1965–2003). He had more than 150 research publications in National and International journals. He had many international research collaborations, namely with Japan, France and UK (with Prof. H. W. Kroto, FRS, Nobel Laureate). Unfortunately, he passed away in December 2020, while this book was in production.
Dr. Madhuri Sharon, a Ph.D. from University of Leicester (1969), has more than four decades of teaching and research experience. She also worked as a Postdoctoral Fellow at Bolton Institute of Technology, UK, and joined Bolton Technical College, UK, as a teaching faculty. After returning to India, she joined as CSIR Pool Officer and worked at Sabour Agricultural University and Central Potato Research Institute. She joined as a Lecturer in Department of Botany, University of Pune, in 1973, where apart from teaching Masters students, she carried out research for 7 years. She has held senior positions in the industries like Gufic (as a Vice-President) and Reliance Industries (as Director).