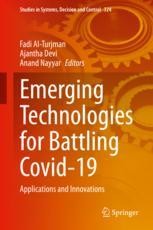 The book presents recent trends and solutions to help healthcare sectors and medical staff protect themselves and others and limit the spread of the COVID-19. The book also presents the problems and challenges researchers and academics face in tackling this monumental task. Topics include: Unmanned Aerial Vehicle (UAV) or drones that can be used to detect infected people in different areas; robots used in fighting the COVID-19 by protecting workers and staff  dealing with infected people; blockchain technology that secures sensitive transactions in strict confidentiality. With contributions from experts from around the world, this book aims to help those creating and honing technology to help with this global threat.

Prof. Dr. Fadi Al-Turjman received his Ph.D. in computer science from Queen’s University, Kingston, Ontario, Canada, in 2011. He is a full professor and a research center director at Near East University, Nicosia, Cyprus. Prof. Al-Turjman is a leading authority in the areas of smart/intelligent, wireless, and mobile networks’ architectures, protocols, deployments, and performance evaluation. His publication history spans over 250 publications in journals, conferences, patents, books, and book chapters, in addition to numerous keynotes and plenary talks at flagship venues. He has authored and edited more than 25 books about cognition, security, and wireless sensor networks’ deployments in smart environments, published by Taylor and Francis, Elsevier, and Springer. He has received several recognitions and best papers’ awards at top international conferences. He also received the prestigious Best Research Paper Award from Elsevier Computer Communications Journal for the period 2015-2018, in addition to the Top Researcher Award for 2018 at Antalya Bilim University, Turkey. Prof. Al-Turjman has led a number of international symposia and workshops in flagship communication society conferences. Currently, he serves as an associate editor and the lead guest/associate editor for several well reputed journals, including the IEEE Communications Surveys and Tutorials (IF 22.9) and the Elsevier Sustainable Cities and Society (IF 4.7).

Dr. V. Ajantha Devi works as Research Head at AP3 Solutions – The Research Foundation. Previously, she worked as Assistant Professor, Department of BCA in Guru Nanak College, Chennai. She completed her PhD from University of Madras in 2015. She has worked as Project Fellow under UGC Major Research Project. She had published good numbers of papers (around 30) in international journals and conference proceedings. She received Special Award: The Integrated Intelligent Research (IIR) – Republic day Achievers Award Conferred Special Award - Social Responsible Researcher for Hearing and Visually Impaired for the year 2017, held on 18th Jan 2018.Her work is based on Artificial Intelligence, Image Processing, Signal Processing, Pattern Matching and Natural Language Processing.

Anand Nayyar (Senior Member, IEEE) received the Ph.D. degree in computer science from Desh Bhagat University, in 2017, in the area of wireless sensor networks. He is currently working with the Graduate School, Duy Tan University, Da Nang, Vietnam. He is also a Certified Professional with more than 75 professional certificates from CISCO, Microsoft, Oracle, Google, Beingcert, EXIN, GAQM, Cyberoam, and many more. He has published more than 300 research articles in various National and International Conferences, and International Journals (Scopus/SCI/SCIE/SSCI Indexed). He is also a member of more than 50 Associations as a Senior Member and a Life Member and also acting as an ACM Distinguished Speaker. He has authored/coauthored cum Edited 25 Books of computer science. He has associated with more than 400 International Conferences as programme committee/advisory board/review board member. He has two patents to his name in the area of Internet of Things and speech processing. He is currently working in the area of wireless sensor networks, MANETS, swarm intelligence, cloud computing, Internet of Things, Blockchain, machine learning, deep learning, cyber security, network simulation, and wireless communications. He has awarded more than 20 Awards for Teaching and Research—Young Scientist, the Best Scientist, the Young Researcher Award, the Outstanding Researcher Award, the Indo-International Emerging Star Award (to name a few). He is acting as the Editor in Chief of IGI-Global, USA journal titled International Journal of Smart Vehicles and Smart Transportation (IJSVST).