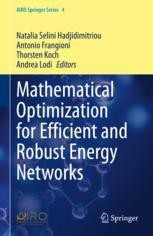 This book presents a collection of energy production and distribution problems identified by the members of the COST Action TD1207 "Mathematical Optimization in the Decision Support Systems for Efficient and Robust Energy Networks". The aim of the COST Action was to coordinate the efforts of the experts in different fields, from academia and industry, in developing innovative tools for quantitative decision making, and apply them to the efficient and robust design and management of energy networks. The work covers three main goals:• to be a nimble while comprehensive resource of several real life business problems with a categorized set of pointers to many relevant prescriptive problems for energy systems;• to offer a balanced mix of scientific and industrial views;• to evolve over time in a flexible and dynamic way giving, from time to time, a more scientific or industrial - or even political in a broad sense - weighed perspective.It is addressed to researchers and professionals working in the field.

Natalia Selini Hadjidimitriou is researcher at the Department of Sciences and Methods for Engineering (DISMI) at University of Modena and Reggio Emilia. She has a degree in Statistics and economics obtained in 2005 and a PhD in Automatic and Operational Research obtained in 2015 at University of Bologna. Her research activities focus on data analytics techniques for the transport and energy sectors. She teaches data science and she has coordinated several EU projects activities.

Antonio Frangioni is Full Professor at the Department of Computer Science of the University of Pisa. His main research interest are the analysis, implementation and testing of solution approaches for problems at the interface between continuous and combinatorial optimization, and their real-life application to several fields (energy, logistic, telecommunications, ...). He is also interested in the numerical analysis, computer science, artificial intelligence and machine learning issues arising within these approaches and, vice-versa, in the use of mathematical programming techniques in those disciplines. He has co-ordinated several scientific and applied projects, among which being vice-chair of the COST Action TD1207.

Andrea Lodi is a full professor in the Department of Mathematical and Industrial Engineering at Polytechnique Montréal and holds the Canada Excellence Research Chair in Data Science for Real-Time Decision-Making. His research interests are mixed-integer linear and nonlinear programming and data science. He received several awards including the IBM Herman Goldstine Fellowship, the Google Faculty Research award and the IBM Faculty Award. He has been network coordinator and principal investigator of both EU and Canadian projects/networks, among which the the COST Action TD1207; since 2006, he is consultant of the IBM CPLEX research and development team.

Thorsten Koch is Professor for Software and Algorithms for Discrete Optimization at TU-Berlin and head of the Applied Algorithmic Intelligence Methods department at the Zuse Institute Berlin. His areas of work include Integer Programming and planning of large-scale infrastructure networks. He coordinated the FORNE project, which received the 2016 EURO Excellence in Practice Award of the European OR Society. Until 2019 he was head of the GasLab and the SynergyLab within the Research Campus MODAL (Mathematical Optimization and Data Analysis Laboratory). He has been chair of the COST Action TD1207.