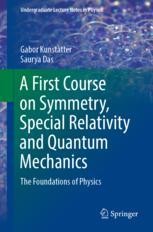 A First Course on Symmetry, Special Relativity and Quantum Mechanics

The Foundations of Physics

This book provides an in-depth and accessible description of special relativity and quantum mechanics which together form the foundation of 21st century physics. A novel aspect  is that symmetry is given its rightful prominence as an integral part of this foundation. The book offers not only a conceptual understanding of symmetry, but also the mathematical tools necessary for quantitative analysis. As such, it provides a valuable precursor to more focused, advanced books on special relativity or quantum mechanics.

Students are introduced to several topics not typically covered until much later in their education.These include space-time diagrams, the action principle, a proof of Noether's theorem, Lorentz vectors and tensors, symmetry breaking and general relativity. The book also provides extensive descriptions on topics of current general interest such as gravitational waves, cosmology, Bell's theorem, entanglement and quantum computing.

Throughout the text, every opportunity is taken to emphasize the intimate connection between physics, symmetry and mathematics.The style remains light despite the rigorous and intensive content.

The book is intended as a stand-alone or supplementary physics text for a one or two semester course for students who have completed an introductory calculus course and a first-year physics course that includes Newtonian mechanics and some electrostatics. Basic knowledge of linear algebra is useful but not essential, as all requisite mathematical background is provided either in the body of the text or in the Appendices. Interspersed through the text are well over a hundred worked examples and unsolved exercises for the student.

Saurya Das is a theoretical physicist whose research areas include quantum gravity theory and phenomenology and cosmology. He has worked on problems in black hole physics, testing signatures of quantum gravity in the laboratory and on dark matter and dark energy, on which he has published more than 80 papers. After doing postdoctoral research at the Pennsylvania State University and the Universities of Winnipeg and New Brunswick, Dr. Das joined the faculty the University of Lethbridge, Canada in 2003, where he is now a full professor.