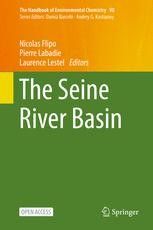 This open access book reviews the water-agro-food and socio-eco-system of the Seine River basin (76,000 km2), and offers a historical perspective on the river’s long-term contamination. The Seine basin is inhabited by circa 17 million people and is impacted by intensive agricultural practices and industrial activities. These pressures have gradually affected its hydrological, chemical and ecological functioning, leading to a maximum chemical degradation between the 1960s and the 1990s. Over the last three decades, while major water-quality improvements have been observed, new issues (e.g. endocrine disruptors, microplastics) have also emerged. The state of the Seine River network, from the headwaters to estuary, is increasingly controlled by the balance between pressures and social responses. This socio-ecosystem provides a unique example of the functioning of a territory under heavy anthropogenic pressure during the Anthropocene era. The achievements made were possible due to the long-term PIREN Seine research program, established in 1989 and today part of the French socio-ecological research network “Zones Ateliers”, itself part of the international Long-term Socio-economic and Ecological Research Network (LTSER).

Written by experts in the field, the book provides an introduction to the water budget and the territorial metabolism of the Seine basin, and studies the trajectories and impact of various pollutants in the Seine River. It offers insights into the ecological functioning, the integration of agricultural practices, the analysis of aquatic organic matter, and the evolution of fish assemblages in the Seine basin, and also presents research perspectives and approaches to improve the water quality of the Seine River. Given its scope, it will appeal to environmental managers, scientists and policymakers interested in the long-term contamination of the Seine River.

Nicolas Flipo’s research is dedicated to the sustainable management of water resources. He therefore develops modeling approaches to simulate the qualitative and quantitative fates of water bodies including surface water, especially rivers, and groundwater. For his PhD and habilitation thesis he developed a systemic view of hydrosystems integrated at the basin or catchment scale. He entered the PIREN Seine research program in 2000 focusing on the simulation of nitrate fluxes related to agricultural practices at the basin scale over several decades. Since then he reinforced within the program an interdisciplinary approach for water management, as illustrated by more than forty scientific papers and eighty participations to international conferences. He is the head of the research programme since 2015 and a research director at MINES ParisTech, Paris Sciences and Lettres University, where he leads the coupled hydrology-hydrogeology research group.

Pierre Labadie is an analytical and environmental chemist at the CNRS, currently based at the University of Bordeaux. His research activities focus on the study of the occurrence, fate (including bioaccumulation and trophic transfer) and impact of organic pollutants of emerging concern in aquatic ecosystems, for instance in river-estuarine-coastal zone systems. Special emphasis is put on organohalogens such as poly- and per-fluoroalkyl substances (PFASs), flame retardants or chlorinated paraffins. He joined the PIREN-Seine programme in 2006 and, since then, his work has often been performed in an interdisciplinary framework, at the interface with ecotoxicology and trophic ecology.

Laurence Lestel is an environmental historian, looking for the environmental impact of increasing industrialization and urbanization in France, 19th and 20th century. She entered the PIREN Seine research program in 2000, to understand the link between the uses of metals in society and river contamination. Since then, she has been coordinating interdisciplinary research programs on river systems. The aim of her work is to analyse how environmental issues were detected and managed by several types of actors: State, experts, public opinion, and the effect of their action on river quality. She is a research director at the CNRS in an interdisciplinary section on “Social environments: from fundamentals to operations”.