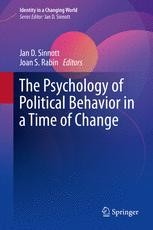 The Psychology of Political Behavior in a Time of Change

This volume seeks to add a unique perspective on the complex relationship between psychology and politics, focusing on three analytical points of view: 1) psychology, politics, and complex thought,  2) bio/psycho/social factors of masculinity and power, and 3) underlying factors in political behavior. Contributors examine recent political events worldwide through a psychological lens, using interdisciplinary approaches to seek a deeper understanding of contemporary political ideas, psychologies, and behaviors. Finally, the book offers suggestions for surviving and thriving during rapid political change.

Among the topics discussed: The Psychology of Political Behavior in a Time of Change is a timely and insightful volume for students and researchers in psychology, political science, gender studies, business and marketing, and sociology, as well as those working in applied settings: practitioners, government workers, NGOs, corporate organizations.
Show all
About the authors

Jan D. Sinnott, PhD, is a Professor of Psychology at Towson University in Baltimore, MD, and a Licensed Psychologist. She specializes in Lifespan Positive Development and the applications of existential, transpersonal, mind-body and positive psychology to adult growth and development.  After completing a Postdoc at the National Institute on Aging, she developed her theory of complex problem-solving in adulthood, termed Complex Postformal Thought. She has authored or co-authored over 125 scholarly and applied books and publications. Her research team is currently studying Complex Problem-solving, Concepts of the Self, Intelligence, and Mindfulness.  Her recent books include: Positive Psychology: Advances in Understanding Adult Motivation (2013, Springer), Adult Development: Cognitive Aspects of Thriving Close Relationships (2014, Oxford University Press), and Identity Flexibility During Adulthood: Perspectives in Adult Development (2017, Springer).

Joan S. Rabin, PhD, is a retired Associate Professor of Psychology at Towson University in Baltimore, MD. She served on advisory committees for both the major in Animal Behavior and the minor in Lesbian, Gay, Bisexual, and Transgender Studies at Towson, and has 20 publications and 40 conference presentations on the behavior of tropical sand fishes as well as issues relating to gender, diversity, the lesbian experience, and the relationship between biology and behavior. As a bio-psychologist she spent many years doing scuba-based research on sand-dwelling tropical fishes with Dr. Eugenie Clark of the University of Maryland and Mote Marine Laboratory, and as a participant in the birth of the Women’s Studies Program at Towson, Dr. Rabin created courses in Sex Differences: Psychological Perspectives, Gender Identity in Transition, and the Psychology of Diversity. She served as project director for research in the Red Sea (Egypt), Bismarck Sea (Papua New Guinea), as well as numerous sites in the Caribbean, Belize and the Netherlands Antilles. Her most recent research trip (2015) was to the Solomon Islands of the South Pacific.
Show all