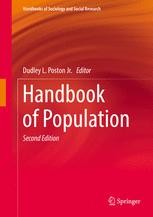 The 2nd edition of the Handbook of Population covers the major topics of the discipline of demography, including current substantive, methodological and theoretical issues of interest, as well as new and emerging topics in the field. In addition to revised, updated and extended chapters that were included in the 1st edition, this 2nd edition of the Handbook brings to the forefront entirely new chapters covering such major themes as children, adoption, sexuality, inequality, population psychology, rural demography, and obesity. Chapters in this Handbook will expand our knowledge of the field, and will raise awareness of the causes and the consequences of demographic behavior and events in societies throughout the world. This 2nd edition will also serve as a reference in the field of population studies for years to come. It will generate new questions and research ideas and will positively impact the growth, development, and expansion of demography.

“Demography is a dynamic field that is constantly evolving, which is why the 2005 edition of The Handbook of Population was such a welcome update to earlier summation prepared in 1959 by Philip Hauser and Dudley Duncan. The second edition of The Handbook is likewise a welcome addition to the literature given the rapid pace of change in demographic research today. Not only have earlier updates on new topics such as biodemography and political demography been expanded, the new edition also contains entirely new chapters on emerging issues of demographic interest such as obesity, inequality, and adoption. Editor Dudley Poston continues to provide a great service to the field by keeping demographers abreast of the latest developments in population science.” (Douglas S. Massey, Princeton, USA)

“The 2nd edition of the Handbook of Population is a comprehensive overview of the interdisciplinary field of population studies with 34 substantive chapters written by 62 authors. This massive undertaking, which includes major revisions and updating of 27 chapters from the first edition plus seven original chapters on new topics (childhood, adoption, sexuality, inequality, population psychology, rural demography, and obesity). In addition to summarizing the theories, classical debates, empirical trends and patterns, and policy issues in an area, many of the chapters offer an original conceptualization of the organization of research on a topic or subfield. The volume was orchestrated by Dudley Poston, who was also an editor of the first edition. Poston offers a compelling vision of the evolution and breadth of demography in his prologue and authored two substantive chapters. Newcomers to demography—from graduate students to researchers in related fields—will find a thorough introduction to the many branches of population studies in this volume. It will also serve a valuable reference work for experienced researchers and specialists who are looking for the latest developments in fields other than their own and perhaps a new take on their own area of specialization.” (Charles Hirschman, University of Washington, USA)