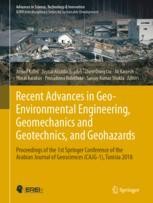 Recent Advances in Geo-Environmental Engineering, Geomechanics and Geotechnics, and Geohazards

This edited volume contains the best papers in the geo-engineering field accepted for presentation at the 1st Springer Conference of the Arabian Journal of Geosciences, Tunisia 2018. In addition, it includes 3 keynotes by international experts on the following topics:

3. Land subsidence induced by the engineering-environmental effects in Shanghai China

The book is useful for readers who would like to get a broad coverage in geo-engineering. It contains 11 chapters covering the following main areas: (a) Applications in geo-environmental engineering including soil remediation, (b) Characterization of geo-materials using geological, geotechnical and geophysical techniques, (c) Soil improvement applications, (d) Soil behaviour under dynamic loading, (e) Recent studies on expansive soils, (f) Analytical and numerical modelling of various geo-structures, (g) Slope stability, (h) Landslides, (i) Subsidence studies and (j) Recent studies on various other types of geo-hazards.

Dr. Karrech has a Multi-Disciplinary B.Sc. in Engineering from Tunisia Polytechnic School (Tunisia, 2001), a M.Sc. in Mechanics of Solids and Structures (2004) and a PhD in Materials and Structures (2008) from the Ecole Nationale des Ponts et Chaussées (Paris France). In addition, he received an Accreditation to Supervise Research in Engineering Sciences from the Ecole Normale Supérieure Paris-Saclay (Paris, France, 2013). Assoc/Prof Karrech is currently an Associate Professor and Graduate Research Coordinator at the School of Civil, Environmental, and Mining Engineering of the University of Western Australia. Prior to his appointment at the UWA, Assoc/Prof Karrech was a Senior Research Scientist at the Commonwealth Scientific and Industrial Research Organisation(CSIRO) until July 2012. He had also held the position of Assistant professor at the Petroleum Institute of Abu Dhabi (2007-2009).  He received several research awards especially from the Australian Research Council and The Research Council of Oman. Assoc/Prof Karrech's research interests are in the computational geo-mechanics for resource engineering applications. In particular, he focuses on poromechanics, plasticity, finite transformations, continuum damage mechanics, non-equilibrium thermodynamics, and multi-physics coupling. He is currently a member of Engineers Australia (MIEAust) and a member of the Australian Institute of Mining and Metallurgy (MAusIMM). In 2017 Assoc/Prof Karrech joined the Arabian Journal of Geosciences (Springer) as an Associate Editor responsible for evaluating submissions in the fields of Civil, Environmental and Mining Engineering with particular focus on computational geo-mechanics for resource engineering applications.

Dr. Kallel holds a B.Eng. in Georesources and Environment (1998) from the University of Sfax (Tunisia), a M.Sc. and a Ph.D. degree in Georesources and Environment (2004) from Hokkaido University (Japan). He joined Venture Business Laboratory (VBL) at Akita University, Japan (2005–2006) as a researcher focusing on refining and recycling technologies for recovering of rare elements from natural and secondary sources. Back in Tunisia, he started working at the University of Gabes from 2006–2011 where he contributed to the elaboration of teaching programs at the Higher Institute of Water Sciences and Technologies of Gabes. Since 2011, he has started lecturing at the Sfax National School of Engineering (University of Sfax, Tunisia). There, he has been also involved in various research projects related to Environmental Geology and Environmental Geotechnics. Dr. Kallel has organized many prestigious workshops, seminars and international conferences. Currently, he is supporting the editorial board of the Euro-Mediterranean Journal for Environmental Integration (Springer). In 2016 Dr. Kallel joined the AJGS as an Assistant Editor supporting the Editor-in-Chief.

Dr. Shukla is an internationally recognized expert in the field of Civil (Geotechnical) Engineering. He is the Founding Editor-in-Chief of International Journal of Geosynthetics and Ground Engineering. He is also the Program Leader of Civil and Environmental Engineering at Edith Cowan University, Perth, Australia. He holds the distinguished professorship in civil engineering at five international universities in India and Fiji. His research interests include geosynthetics, ground improvement and several other topics. He is an author of 10 books, and more than 200 research papers, including over 120 refereed journal papers. He is a fellow of Engineers Australia and several other professional bodies. He serves on the editorial boards of 12 international journals.

Dr. Karakus holds a B.Sc. in Mining Engineering (1991) from Hacettepe University (Turkey), and a Ph.D. degree in Geotechnical Engineering (2000) from the University of Leeds, UK. He is currently Associate Professor in the School of Civil, Environmental and Mining Engineering and leading Mining/Geotechnical Engineering Research Group. His research area is the field of experimental rock mechanics, fracture propagation and damage assessment by acoustic emissions, constitutive modeling and numerical analysis in tunneling and rock mechanics. He has also been researching on strain burst/rock burst analysis for deep tunnels and mining excavations. He has directed and involved in many research projects including ARC - Australian Research Council grants, CRC-Deep Exploration Technologies, ACARP - Australian Coal Association Research and Industry supported projects. Dr. Karakus has published several book chapters and over a hundred papers in international Journals and Conferences. Dr. Karakus is a member of Editorial board of three journals; International Journal of Rock Mechanics and Mining Sciences, Tunnelling and Underground Space Technology, International Journal of Mining, Reclamation, and Environment. He is currently serving as an associate editor of Arabian Journal of Geosciences.
Dr. Cui is the Dean of Institute of Geotechnical Engineering, China University of Mining and Technology. In July 2008, he obtained the PhD from School of Civil Engineering, Tongji University, Shanghai, China. Since then, he had been a postdoctoral research fellow in the Hong Kong University of Science and Technology for one year. He joined Shanghai Institute of Geological Survey in 2009. In July 2010, he joined CUMT as an associate professor and was promoted to full professor in 2013. Supported by China Scholarship Council, from Aug. 2015 to Aug. 2016, as a visiting scholar, he researched and studied in the department of Civil, Environmental and Architectural Engineering, University of Colorado Boulder. He won Nomination of 100 Excellent Doctoral Dissertations in China in 2011. He won Shanghai Excellent Doctoral Dissertations in 2010 and Excellent doctorate thesis of Tongji University in 2009. In 2015, he was awarded the third prize of Shanghai Natural Science. In 2003, he was awarded the second prize of Natural Science of the Ministry of Education. In 2008, he was awarded the second prize of Progress of Science and Technology in Shanghai. In 2012, he was selected as Qinglan Project for Outstanding Young Teachers of Jiangsu Province and in 2016, he was selected as 333 Talent Project in Jiangsu Province. In 2014 and in 2017, he was twice selected as Young Academic Leader of China University of Mining and Technology. In 2015, he was awarded as Excellent Innovation Team Leader of China University of Mining and Technology. His research interests focus mainly on the urban subway tunnel, the deformation of soft foundation, the soil dynamics, the centrifuge model test and the artificial frozen soil. In the past 5 years, he took charge of National Natural Science Foundation of China (NSFC), Jiangsu Natural Science Foundation of China, Outstanding Innovation Team Project in China University of Mining and Technology and Special Fund for China Postdoctoral Science Foundation. He published more than 60 papers, in which 37 English papers (indexed by SCI) have been published in Engineering Geology, Natural Hazards, Computers and Geotechnics, Cold Regions Science and Technology, Environmental Earth Sciences, International Journal of Rock Mechanics and Mining Sciences, etc. He published three books. He has applied for 6 national invented patents, among which four patents have been awarded. He is the specialized committee member of the soft soil engineering of the geotechnical engineering branch of the Civil Engineering Society of China, the member of international society for soil mechanics and geotechnical engineering (ISSMGE) and the member of international association for engineering geology and environment (IAEG).

Dr. Kulatilake is a Professor of Geotechnical Engineering and Director of Rock Mass Modeling and Computational Rock Mechanics Laboratories at the University of Arizona. He is a registered Professional Civil Engineer in California. He received his B.Sc. (in 1976) in Civil Engineering from the University of Sri Lanka, Peradeniya, MS (in 1978) in Soil Engineering from the Asian Institute of Technology, Bangkok, Thailand and Ph.D. (in 1981) in Civil Engineering (with geotechnics emphasis) from the Ohio State University, USA. He has over 38 years of experience in rock mechanics & rock engineering associated with mining, civil and petroleum engineering, geotechnical engineering, and applications of probabilistic and numerical methods to geo-engineering.  He has written over 240 papers and is a member of several technical committees. He has delivered over 30 keynote lectures and over 50 other invited lectures throughout the world on topics related to rock fracture network modeling, probabilistic geotechnics, mechanical and hydraulic properties of joints, rock slope stability and mechanical and hydraulic behavior of rock masses. He has been a research paper reviewer for over 25 technical Journals and an editorial board member for Int. Jour. of Rock Mechanics & Mining Sciences, Int. Jour. of Geotechnical and Geological Engineering, Int. Jour. of Advances in Geological and Geophysical Engineering, Coal Science and Technology and Journal of Mining & Science-Turkey. Currently he is serving as an Associate Editor for Arabian Journal of Geosciences. He has taught short courses on stochastic fracture network modeling, rock slope stability analysis, Block theory, and rock joint roughness and aperture in Sweden, Mexico, Austria, USA, Canada, Hong Kong, Poland, Finland, Australia, South Korea, Sri Lanka, Egypt, Iran, Chile, China, Italy, Peru and Tunisia. He has served over 20 years either as the primary or the sole examiner for the geological engineering professional exam conducted by the Arizona State Board of Technical Registration. He was a Visiting Professor at the Royal Institute of Technology and Lulea University of Technology in Sweden as part of his sabbatical leave. Also, he was a Visiting Research Fellow at the Norwegian Geotechnical Institute, for another part of his sabbatical leave. Due to the contributions he made on teaching, research, consulting and service activities, he was elected to the Fellow Rank of the American Society of Civil Engineers at the relatively young age of 45. In 2002, he received Distinguished Alumnus Award from the College of Engineering, Ohio State University and Outstanding Asian American Faculty Award from the University of Arizona in recognition of his achievements and contributions made to the advancement of his profession. In December 2005, Eurasian National University, Kazakhstan conferred him “Honorary Professorship”. In August 2007, he organized and ran a successful International Conference on Soil & Rock Engineering in Sri Lanka. In January 2009, he organized and ran a high quality International Conference on Rock Joints and Jointed Rock Masses in Tucson, Arizona. He was the guest editor for two special issues published in the Jour. of Geotechnical and Geological Engineering. He received “Kwang-Hua Visiting Professorship” for 2009-2010 from the College of Engineering, Tongji University, China. He was a Recipient of “Guest Professorship” from Wuhan University, China for 2010-2013. A few years back, he also received an award from the Chinese Academy of Sciences to spend a sabbatical in China as a Senior Visiting Professor. In 2013 and 2016, he received Peter Cundall awards.

Dr. Erguler is a full professor at Geological Engineering Department at Kütahya Dumlupınar University (Turkey). Dr. Erguler holds a B.Sc. (1998), a M.Sc. (2001) and a Ph.D. degree (2007) in Geological Engineering from Hacettepe University (Turkey). His research interests mainly focus on rock mechanics, engineering geology, environmental geology and soil mechanics. His current investigation is to understand and model thermo- hydro-mechanical behavior of shale rocks in the area of shale gas production. In addition to doing many researches and performing industry funded projects, he has also been teaching and supervising undergraduate and graduate students. In 2017, Dr. Erguler joined the Arabian Journal of Geosciences (AJGS) as an Associate Editor responsible for evaluating submissions in the fields of rock mechanics, engineering geology, environmental geology and soil mechanics.