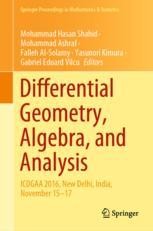 This book is a collection of selected research papers, some of which were presented at the International Conference on Differential Geometry, Algebra and Analysis (ICDGAA 2016), held at the Department of Mathematics, Jamia Millia Islamia, New Delhi, from 15–17 November 2016. It covers a wide range of topics—geometry of submanifolds, geometry of statistical submanifolds, ring theory, module theory, optimization theory, and approximation theory—which exhibit new ideas and methodologies for current research in differential geometry, algebra and analysis. Providing new results with rigorous proofs, this book is, therefore, of much interest to readers who wish to learn new techniques in these areas of mathematics.

MOHAMMAD HASAN SHAHID is Professor at the Department of Mathematics, Jamia Millia Islamia, New Delhi, India. Earlier, he served as Associate Professor at King Abdul Aziz University, Jeddah, Saudi Arabia, from 2001–2006. He earned his Ph.D. in Mathematics from Aligarh Muslim University on the topic "On geometry of submanifolds” in 1988 under (Late) Professor Izhar Husain. He was one the recipients of post-doctoral fellowship from the University of Patras, Greece, during October 1997 to April 1998. He has published more than 100 research articles in various national and international journals of repute. Recently, he was awarded the Sultana  Nahar Distinguished Teacher award of the Year 2017–2018 for his outstanding contribution in research.

FALLEH R. AL-SOLAMY is Professor of Differential Geometry at King Abdul Aziz University, Jeddah, Saudi Arabia. He studied mathematics at King Abdul Aziz University, Jeddah, Saudi Arabia and earned his Ph.D. in Mathematics from the University of Wales Swansea, Swansea, United Kingdom, in 1998, under Edwin Beggs. His research interests concern the study of the geometry of submanifolds in Riemannian and semi-Riemannian manifolds, Einstein manifolds, applications of differential geometry in physics. Co-author of a book, Prof. Al-Solamy's research papers have been published in journals and conference proceedings of repute. He is a member of the London Mathematical Society, the Institute of Physics, the Saudi Association for Mathematical Sciences, the Tensor Society of India, the Saudi Computer Society and the American Mathematical Society.

YASUNORI KIMURA is Professor at the Department of Information Science, Faculty of Science,Toho University, Chiba, Japan.  He was awarded with a Ph.D. in the year 2000 from the Tokyo Institute of Technology, Japan. He has authored three books and published about 100 research articles in various international and national journals of repute. His area of research is nonlinear analysis and set-valued analysis.

GABRIEL EDUARD VÎLCU is Professor of Mathematics at the Petroleum-Gas University of Ploiești, Romania. He received his Ph.D. in Mathematics from the University of Bucharest, Romania, in the year 2007. Additionally, he is a senior researcher at the Research Centre in Geometry, Topology and Algebra, Faculty of Mathematics and Computer Science, University of Bucharest, Romania. His main research interest is differential geometry and its applications. Professor Vîlcu has authored more than 60 peer-reviewed scientific publications in several renowned international journals and conference proceedings.