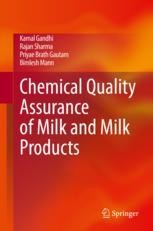 This book discusses quality-related aspects of milk and milk products, covering the various analytical procedures for testing the quality and composition. It also describes the adulteration of milk and milk products and the common as well as advanced techniques used to detect such adulteration. Further, the book examines food laws, guidelines and regulations laid down by FSSAI, CODEX, ISO, IDF and USFDA, and addresses the functioning of a number of international and national organizations, including the WTO, Codex Alimentarius Commission, and BIS. Familiarizing readers with the concepts of QC, TQM, PDCA cycle and related concepts of quality assurance, the book also provides information on other topics that indirectly contribute to the quality of milk and milk products, like the calibration of milk testing equipment, quality of water used in milk processing and the standardization of various chemicals used for testing.

This book is a valuable resource for researchers and industry professionals dealing with dairy products.

Kamal Gandhi has been a Scientist at the Department of Dairy Chemistry, National Dairy Research Institute, Karnal since 2016. He has received his Ph.D. degree in Dairy Chemistry from National Dairy Research Institute University in 2014, and worked at the Gujarat Cooperative Milk Marketing Federation (GCMMF), Amul, for one and half years. His areas of expertise include: milk and milk products adulteration detection, functional foods and milk lipids. He is the author of 20 research, review and popular science articles in national and international journals and compendiums and recipient of best paper and poster awards. He is a life member of the Indian Science Congress Association, Association of Food Scientists and Technologists, India (AFSTI), and the Indian Dairy Association (IDA).

Rajan Sharma is currently working as the Principal Scientist at the Department of Dairy Chemistry, National Dairy Research Institute, Karnal. He has 21 years of experience in the field of milk quality and analytical dairy chemistry. He has been associated with Food Safety and Standards Authority of India since 2009, as a member of the Scientific Panels on Milk and Milk Products as well as on Methods of Sampling and Analysis. He has worked as an assessor for the National Accreditation Board for Testing and Calibration Laboratories (NABL) since 2003. Many of the rapid methods for assessing milk quality developed by his group have been commercialized for the dairy industry. He is a recipient of the NRDC Meritorious Invention Award – 2013, and is a Fellow of the National Academy of Agricultural Sciences and National Academy of Dairy Science.

Priyae Brath Gautam is currently pursuing his PhD in Dairy Chemistry at the National Dairy Research Institute, Karnal. He was the Deputy Manager (Quality Assurance) of the Punjab State Co-operative Milk Producers' Federation Limited for 2 years. He was awarded the University Gold Medal for his academic excellence in his undergraduate course in Dairy Technology.

Bimlesh Mann is currently the Head and Principal Scientist at the Dairy Chemistry Division at ICAR-National Dairy Research Institute, Karnal. Her research over the last 28 years has focused on the chemistry of milk and milk products, with a focus on bioactive milk proteins and peptides, functional dairy foods and nanoencapsulation of bioactive components for dairy foods. She is also involved in research related to quality assurance of dairy products. She is the recipient of a Best Teacher Award from the Indian Council of Agricultural Research.