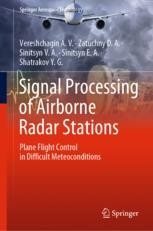 This book highlights new methods and parametric algorithms for the digital coherent processing of signals in airborne radar systems located on air vehicles. Using the autoregressive (AR) model, it delivers more accurate danger assessments for flight in wind shear and atmospheric turbulence, while also suggesting how they could be implemented. Given its scope, the book is intended for technical experts whose work involves the development, production and operation of airborne radio-electronic systems.

Vereshchagin Alexey Vladimirovich has an MS in Engineering and is an Assistant Professor and deputy director of the Scientific and Technological Centre of Perspective Programs and Management of Developments at JSC Radioavionika. He has written more than 30 scientific works, and is devoted to improving the tactical technical characteristics of modern radio-electronic systems and complexes. He participated in the translation of research into mass-produced goods in Russia.

Zatuchny Dmitry Aleksandrovich has an MS in Engineering and is an Associate professor at the Department of Computation Machines, Complexes, Systems and Networks at Moscow State Technical University of Civil Aviation. He is the author of more than 130 scientific works, including 3 monographs, 5 textbooks and 3 state registered computer programs. He was responsible for a number of research projects on ensuring the functioning of modern navigation systems in civil aviation aircraft and air traffic control.

Sinitsyn Vladimir Aleksandrovich has an MS in Engineering and is an Assistant Professor at the Department of Radio-electronic Control Systems of Baltic State Technical University’s Military Mechanical Institute. He is the author of more than 80 scientific works, mostly on issues related to increasing the efficiency of the various  radio-electronic systems used in civil aviation.

Sinitsyn Evgeniy Aleksandrovich holds a Doctorate in Engineering and is Chief of the Research Department of JSC VNIIRA, and a Professor at the Department of Radio-electronic Control Systems of Baltic State Technical University’s Military Mechanical Institute. He is the author of more than 120 publications and 15 patents related to the development of new methods and algorithms for digitally processing signals from vehicular radio-location stations located on civil aircraft.

Shatrakov Yuri Grigorievich is a Doctor of Technical Sciences, Russian Federation Honored Worker of Science and a Professor at the Academy of Technological Sciences of the Russian Federation. He has worked in the field of air navigation since 1963, and his interests focus on ground and onboard systems of radio navigation, instrumental landing, secondary radar, air traffic control systems, and training and simulation systems. He has published more than 400 scientific papers.
Show all