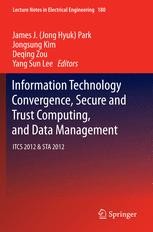 The 4th FTRA International Conference on Information Technology Convergence and Services (ITCS-12) will be held in Gwangju, Korea on September 6 - 8, 2012.
The ITCS-12 will be the most comprehensive conference focused on the various aspects of advances in information technology convergence, applications, and services.
The ITCS-12 will provide an opportunity for academic and industry professionals to discuss the latest issues and progress in the area of ITCS. In addition, the conference will publish high quality papers which are closely related to the various theories, modeling, and practical applications in ITCS. Furthermore, we expect that the conference and its publications will be a trigger for further related research and technology improvements in this important subject.
The ITCS-12 is the next event in a series of highly successful International Conference on Information Technology Convergence and Services(ITCS-11), previously held in Gwangju, Korea on October, 2011.

Jong Hyuk Park received his Ph.D. degree in Graduate School of Information Security from Korea University, Korea. From December, 2002 to July, 2007, Dr. Park had been a research scientist of R&D Institute, Hanwha S&C Co., Ltd., Korea. From September, 2007 to August, 2009, He had been a professor at the Department of Computer Science and Engineering, Kyungnam University, Korea. He is now a professor at the Department of Computer Science and Engineering, Seoul National University of Science and Technology (SeoulTech), Korea. Dr. Park has published about 100 research papers in international journals and conferences. He has been serving as chairs, program committee, or organizing committee chair for many international conferences and workshops. He is President of the Future Technology Research Association International (FTRA) and Korea Information Technology Convergence Society (KITCS). He is editor-in-chief of International Journal of Information Technology, Communications and Convergence (IJITCC), InderScience and Journal of Convergence (JoC),  FTRA Publishing. He is Associate Editor / Editor of 14 international journals including 8 journals indexed by SCI(E). In addition, he has been serving as a Guest Editor for international journals by some publishers: Springer, Elsevier, John Wiley, Oxford Univ. press, Hindawi, Emerald, Inderscience. His research interests include security and digital forensics, ubiquitous and pervasive computing, context awareness, multimedia services, etc. He got the best paper award in ISA-08 conference and the outstanding leadership awards from IEEE HPCC-09 and ICA3PP-10. Dr. Park' s research interests include Digital Forensics, Security, Ubiquitous and Pervasive Computing, Context Awareness, Multimedia Service, etc. He is a member of the IEEE, IEEE Computer Society, KIPS, KICS, KIISC, KMMS, KDFS and KIIT.

Jongsung Kim received his Bachelor and Master degrees in Mathematics from Korea university, Korea in 2000 and 2002, respectively. He received double Doctoral degrees on “Combined Differential, Linear and Related-Key Attacks on Block Ciphers and MAC Algorithms”, completed in November 2006 and February 2007 at the ESAT/COSIC group of Katholieke Universiteit Leuven and at Engineering in Information Security of Korea University, respectively. He had been a Research Professor of Center for Information Security Technologies (CIST) at Korea University, from March 2007 till August 2009. Dr. Kim has been an Assistant Professor of Division of e-Business, Kyungnam University, Korea, since September 2009. His research interests include symmetric cryptosystems, side-channel attacks, ubiquitous computing systems and digital forensics.

Deqing Zou is a professor Huazhong Universtiy of Science and Technology(HUST). He got his Ph.D in HUST in 2004. His research interests include system security, trusted computing, virtualization and cloud security, fault tolerance. He is the leader of system security group in Service Computing Technology and System Lab (SCTS) & Cluster and Grid Computing Lab (CGCL), HUST. Prof. Zou has published two books, more than 50 high-quality papers. He has served as PC Chairs/PC members in more than 30 International conferences.

Yang Sun Lee received the B.S. and M.S. degrees in Electrical & Electronic Engineering from Dongshin University and Ph.D. degrees in Dept. of IT Engineering from Mokwon University in 2001, 2003 and 2007, respectively. He was a Senior Engineer at R&D Center, Fumate Co., Ltd. from 2007 to 2009. Since 2009, he has worked as a Research Professor in Dept. of Information Communication Engineering at Chosun University. He is also serving as a guest editor, and editorial staff and review committee of INFORMATION Jorunal, Security and Communication Networks - Wiley InterScience, Wireless Personal Communications – Springer, International Journal of Communication Systems – Wiley InterScience, IET Signal Processing – IET Journal, IET Communications – IET Journal and other journals. His current research interests include UWB, multimedia communication, Network Transmission Scheme and Ubiquitous Sensor Networks.