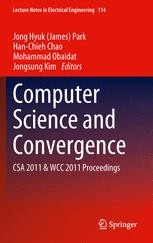 CSA-11 will be the most comprehensive conference focused on the various aspects of advances in computer science and its applications and will provide an opportunity for academic and industry professionals to discuss the latest issues and progress in the area of CSA. In addition, the conference will publish high quality papers which are closely related to the various theories and practical applications in CSA. Furthermore, we expect that the conference and its publications will be a trigger for further related research and technology improvements in this important subject. The main scope of CSA-11 is as follows:

WCC-11 is a major conference for scientists, engineers, and practitioners throughout the world to present the latest research, results, ideas, developments and applications in all areas of convergence technologies. The main scope of WCC-11 is as follows:

Jong Hyuk Park received his Ph.D. degree in Graduate School of Information Security from Korea University, Korea. From December, 2002 to July, 2007, Dr. Park had been a research scientist of R&D Institute, Hanwha S&C Co., Ltd., Korea. From September, 2007 to August, 2009, He had been a professor at the Department of Computer Science and Engineering, Kyungnam University, Korea. He is now a professor at the Department of Computer Science and Engineering, Seoul National University of Science and Technology (SeoulTech), Korea. Dr. Park has published about 100 research papers in international journals and conferences. He has been serving as chairs, program committee, or organizing committee chair for many international conferences and workshops. He is President of the Future Technology Research Association International (FTRA) and Korea Information Technology Convergence Society (KITCS).

Han-Chieh Chao is currently a jointly appointed professor in the institute of Computer Science and Information Engineering and the institute and department of electronic engineering at National Ilan University, Taiwan; jointly adjunct professor in the institute and department of electrical engineering at National Dong Hwa University, Taiwan; and honorary adjunct professor in Beijing Jiaotong University (985 University), Xiamen University (985 University), Lanzhou University (985 University) and Yantai University, China. His research interests include High Speed Networks, Wireless Networks, IPv6 based Networks, Digital Creative Arts and Digital Divide. He received his M.S. and Ph.D degrees in Electrical Engineering from Purdue University in 1989 and 1993 respectively. He has authored or co-authored 4 books and has published about 250 refereed professional research papers. He has completed 90 MSEE and 2 Ph.D thesis students. Dr. Chao has received many research awards, including Purdue University SRC awards, and NSC research awards (National Science Council of Taiwan). Dr. Chao has been invited frequently to give talks at national and international conferences and research organizations.

Mohammad S. Obaidat is an internationally well known academic/researcher/ scientist. He received his Ph.D. and M. S. degrees in Computer Engineering with a minor in Computer Science from The Ohio State University, Columbus, Ohio, USA. Dr. Obaidat is currently a full Professor of Computer Science and Software Engineering at Monmouth University, NJ, USA. Among his previous positions are Chair of the Department of Computer Science and Director of the Graduate Program at Monmouth University and a faculty member at the City University of New York. Prof. Obaidat is the author/co-author of numerous books including "E-business and Telecommunication Networks",  (Springer in 2008) and APPLIED SYSTEM SIMULATION: Methodologies and Applications, (Springer 2003). Professor Obaidat has served as a consultant for several corporations and organizations worldwide.  Dr. Obaidat received very recently the Society for Modeling and Simulation Intentional (SCS) prestigious McLeod Founder's Award  in recognition of his outstanding technical and professional contributions to modeling and simulation. He also received the Nokia Research Fellowship Award and the distinguished Fulbright Scholar Award. He has been invited to lecture and give keynote speeches worldwide. His research interests are: wireless communications and networks, computer networks and telecommunications, security of network, information and computer systems, security of e-based systems, performance evaluation of computer systems, algorithms and networks,  high performance and parallel computing/computers, applied neural networks and pattern  recognition, adaptive learning and speech processing.

Jongsung Kim received his Bachelor and Master degrees in Mathematics from Korea university, Korea in 2000 and 2002, respectively. He received double Doctoral degrees on “Combined Differential, Linear and Related-Key Attacks on Block Ciphers and MAC Algorithms”, completed in November 2006 and February 2007 at the ESAT/COSIC group of Katholieke Universiteit Leuven and at Engineering in Information Security of Korea University, respectively. He had been a Research Professor of Center for Information Security Technologies (CIST) at Korea University, from March 2007 till August 2009. Dr. Kim has been an Assistant Professor of Division of e-Business, Kyungnam University, Korea, since September 2009. His research interests include symmetric cryptosystems, side-channel attacks, ubiquitous computing systems and digital forensics.