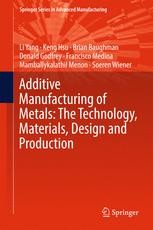 Additive Manufacturing of Metals: The Technology, Materials, Design and Production

This book offers a unique guide to the three-dimensional (3D) printing of metals. It covers various aspects of additive, subtractive, and joining processes used to form three-dimensional parts with applications ranging from prototyping to production.

Examining a variety of manufacturing technologies and their ability to produce both prototypes and functional production-quality parts, the individual chapters address metal components and discuss some of the important research challenges associated with the use of these technologies.

As well as exploring the latest technologies currently under development, the book features unique sections on electron beam melting technology, material lifting, and the importance this science has in the engineering context. Presenting unique real-life case studies from industry, this book is also the first to offer the perspective of engineers who work in the field of aerospace and transportation systems, and who design components and manufacturing networks. Written by the leading experts in this field at universities and in industry, it provides a comprehensive textbook for students and an invaluable guide for practitioners
Show all
About the authors

Dr. Yang received his Ph.D. in industrial engineering from North Carolina State University in 2011, and M.S. in mechanical engineering from Tsinghua University in 2007. He is currently the assistant professor in Department of Industrial Engineering at University of Louisville, Louisville, KY, USA, with primary research focused on design of additive manufacturing and lightweight structure designs. Between 2012 and 2013, he worked as testing engineer in B/E Aerospace, and took primary responsibilities of the establishment and daily operation of the life cycle testing group. He is the recipient of 2016 International Outstanding Young Researcher in Freeform and Additive Manufacturing (FAME Junior) Award, the 2012 Emerald Engineering Outstanding Doctoral Research Award in Additive Manufacturing, and 2007 3rd Grade Scholarship of Excellency in Tsinghua University. Dr. Yang is a member of IIE, SME, SAMPE, ACerS, and TMS. He is also a member of Alpha Pi Mu (Industrial Engineering).

Dr. Hsu received his Ph.D in Mechanical Science and Engineering from the University of Illinois at Urbana-Champaign in 2009.  Since then he has devoted his professional life to research, teaching, and engineering consulting.  More than 30 peer-reviewed journal publications has resulted from his research work which revolves around advanced manufacturing at multiple scales in both top-down and bottom-up approaches.  He has 8 years of directing additive manufacturing research laboratories including the Ford Rapid Prototyping Lab at the University of Illinois, and the Advanced Multi-scale Manufacturing Lab within the Manufacturing Research and Innovation Hub at ASU. He is a member of SME.

Dr. Nanu Menon received his Ph.D. in Materials Engineering from Vanderbilt University.  This was followed by a post-doc appointment at USC before proceeding to work at WPAFB, Dayton, OH as a National Research Council Fellow. Since then, he has worked at Westinghouse Hanford, Richland, WA. and GE Aircraft Engines at Evendale before coming to work at Garrett in Phoenix in 1981.  At Garrett/Allied Signal/Honeywell, he has been working in the Life Methods Group for the past 32 years, characterizing alloys, creating mechanical property, fatigue and creep rate models, developing life prediction codes, and establishing fractographic knowledge useful in failure analysis.

Dr. Soeren Wiener is the Director of Technology and Advanced Operations at Honeywell Aerospace, where he oversees the development and deployment of game-changing manufacturing technologies into the global supply chain. Dr. Wiener earned a Master’s Degree in Mechanical Engineering from the Technical University (TH) in Karlsruhe, Germany with an emphasis on production technology and computer aided design. After joining AlliedSignal (later Honeywell) he earned his Doctorate in Mechanical Engineering from the Technical University in Dresden, Germany as an external candidate with an emphasis on closed-loop systems for design, manufacturing, and inspection of highly stressed aerospace components. Prior to his current role with Honeywell, Dr. Wiener was Director of Quality in Mechanical Repair and Overhaul. Additionally, he led manufacturing engineering, customer quality and turbine engine overhaul organizations. He began his career as a design engineer specializing in gear and coupling designs. Dr. Wiener is currently focused on achieving full-scale production of FAA-certified engine hardware using metal 3D printing and other novel manufacturing processes.

Dr. Francisco Medina PhD, is the Technology Leader for additive manufacturing at EWI. Previously, he was a senior specialist in materials development at Arcam where he managed Arcam’s relationships and R&D activities in North America. Medina received a bachelor’s degree in mechanical engineering in 2000, a master’s degree in 2005 and a doctorate in materials science in 2013, all from the University of Texas at El Paso. He has been involved in additive manufacturing since 2000, focusing his attention in the metals additive manufacturing methods area for rapid material development and low-cost powder manufacturing. Medina’s work in the additive manufacturing industry has been published in numerous journals and conference proceedings. He has been recognized with several awards, including first place in EBM’s Users Group Meeting Part Completion for Best Creative Part, Outstanding Paper by Emerald Group Publishing, the 2007 Emerald Literati Network Award for Excellence and the 2004 RTAM/SME Dick Aubin Distinguished Paper Award. He holds nine additive manufacturing patents, with several other patents pending. Medina is the former chair of the Additive Manufacturing Community. Professional Affiliations SME, MRS, ASTM International and TMS.

Donald Godfrey is employed as an Engineering Fellow in the science of additive manufacturing for Honeywell.  Donald holds over 17 patents related to additive manufacturing. Donald Godfrey holds a BS from Purdue University and an MS from Indiana Wesleyan University.   He earned a Continuation Education Diploma from The University of Wisconsin – Madison in the area of Value Engineering and a Masters Certificate from The George Washington University in the area of Project Management.  He is a Honeywell Certified Black Belt and Lean Expert and holds Certified Project Management status from the Project Management Institute (PMI). Donald is the corporate focal for additive manufacturing within Honeywell International. He is responsible for the integration of 3D Printing / Additive Manufacturing into the Honeywell business culture and has technology responsibility for the laboratories in Brno, Czech Republic; Shanghai, China; Bangalore, India and Phoenix, Arizona.