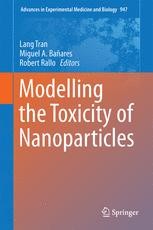 Modelling the Toxicity of Nanoparticles

In today’s nanotechnology and pharmaceutical research, alternative toxicology testing methods are crucial for ethically and commercially sound practice. This book provides practical guidelines on how to develop and validate quantitative nanostructure-toxicity relationship (QNTR) models, which are ideal for rapidly exploring the effects of a large number of variables in complex scenarios.

Through contributions by academic, industrial, and governmental experts, Modelling the Toxicity of Nanoparticles delivers clear instruction on these methods and their integration and use in risk assessment. Specific topics include the physico-chemical characteristics of engineered nanoparticles, nanoparticle interactions, in vivo nanoparticle processing, and more.

A much-needed practical guide, Modelling the Toxicity of Nanoparticles is a key text for researchers as well as government and industry regulators.

Dr Lang Tran is the Principal Toxicologist at the Institute of Occupational Medicine. Lang has contributed considerably on the toxicology of inhaled particles and fibres. His early work was in the mathematical modelling of the retention and clearance of man-made mineral fibres and mineral dusts.  He has led the investigation and the risk assessment of inhaled poorly soluble particles which helped NIOSH in establishing the control limit for fine and ultrafine TiO2 aerosol.From his experience with particle toxicology Lang has contributed also in many European Research Projects through the Framework 6 and 7 Programmes. Most notable are the project FP7 ENPRA (Risk Assessment of Engineered Nanoparticles) and FP7 MARINA (Managing Risks of Nanoparticles). Lang is currently the chairman of the COST Action TD1204 MODENA on Modelling the toxicity of nanoparticles. Lang is an editor of the NANOTOXICOLOGY and PARTICLE and FIBRE TOXICOLOGY journals.  He also contributes in the organisation of the NANOTOXICOLOGY Symposium series.
Miguel A. Bañares (PhD in Chemistry, University of Salamanca, 1992) is Full Research Professor at ICP Institute for Catalysis, CSIC (Spanish National Research Council), where he joined in 1996 and Associate Editor for Catalysis Today. Was postdoctoral fellow at Lehigh University, PA, and at the University of Notre Dame, IN. Bañares has recently been distinguished by the “Otto Mønsted" Visiting Professorship at DTU University, Denmark (2014) and the FEDER-Region Base de Normandie, “chaire d’excellence” at CNRS Caen, France, during (2013-2015).

Bañares research focuses on understanding structure-property relationships at a molecular scale at the surface of functional materials for catalysis and toxicity by combining in situ and operando analyses with computational description of the structure, spectra and reactivity of functional materials. He has more than 190 publications in international journals and  an “h” factor or 37 with more than 27 plenary/keynote lectures. Bañares research stands on the use of real-time Raman spectroscopy during catalysis combining in situ spectroscopic characterization of functional materials with simultaneous performance measurement. He coined the term “operando” to identify this advanced in situ spectroscopy.

Dr. Robert Rallo, Associate Professor of Computer Science and Artificial Intelligence in the Departament d’Enginyeria Informàtica i Matemàtiques at Universitat Rovira i Virgili, Tarragona, Catalunya. He directs the Research Group on Bioinformatics & Computational Engineering (BIOCENIT, www.biocenit.cat) and is also the Director of the Advanced Technology Innovation Center (ATIC) at the Universitat Rovira i Virgili. In 2007 and 2009 he was a visiting professor at the University of California Los Angeles where he is also faculty member of the Center for Environmental Implications of Nanotechnology. Since 2013 he serves as Chair for the Modeling WG in the EU NanoSafety Cluster. From 2013 to 2015 he was the EU co-chair of the US-EU Nano-Dialogue Community of Research on Predictive Modeling and Human Health. His research focuses on multi-scale modeling of complex systems of industrial or environmental relevance. Dr. Rallo serves regularly as reviewer for high-ranked scientific journals and international research organizations.