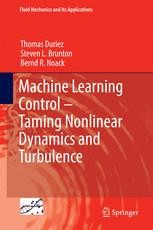 This is the first textbook on a generally applicable control strategy for turbulence and other complex nonlinear systems. The approach of the book employs powerful methods of machine learning for optimal nonlinear control laws. This machine learning control (MLC) is motivated and detailed in Chapters 1 and 2. In Chapter 3, methods of linear control theory are reviewed. In Chapter 4, MLC is shown to reproduce known optimal control laws for linear dynamics (LQR, LQG). In Chapter 5, MLC detects and exploits a strongly nonlinear actuation mechanism of a low-dimensional dynamical system when linear control methods are shown to fail. Experimental control demonstrations from a laminar shear-layer to turbulent boundary-layers are reviewed in Chapter 6, followed by general good practices for experiments in Chapter 7. The book concludes with an outlook on the vast future applications of MLC in Chapter 8. Matlab codes are provided for easy reproducibility of the presented results. The book includes interviews with leading researchers in turbulence control (S. Bagheri, B. Batten, M. Glauser, D. Williams) and machine learning (M. Schoenauer) for a broader perspective. All chapters have exercises and supplemental videos will be available through YouTube.

Thomas Duriez is a tenured French researcher at CONICET, Buenos Aires, Argentina. He works on experimental, numerical and theoretical aspects of fluid mechanics focusing on flow control. He is part of the pioneer team developing Machine Learning Control for laminar and turbulent flows. He studied at ESPCI-ParisTech, the Paul Sabatier University and IMFT (Toulouse). After his PhD thesis at PMMH (Paris) on the control of separated flows, he had several postdoctoral appointments in academia and industry, including PMMH (Paris),  LFD, LIMSI (Orsay, France) and PPRIME Institute (Poitiers, France) as part of the TUCOROM team. In Poitiers, he developed Machine Learning Control under the leadership of Bernd Noack.

Steven L. Brunton is an Assistant Professor in Mechanical Engineering and an Adjunct Assistant Professor in Applied Mathematics at the University of Washington in Seattle. He graduated with a B.S. in Mathematics from the California Institute of Technology and received his PhD in Mechanical and Aerospace Engineering from Princeton University. Currently, his research interests include data-driven modeling and control of complex dynamical systems using machine learning, compressed sensing, uncertainty quantification, and equation-free modeling; Flow control of unsteady aerodynamics, transport phenomena, and turbulent mixing enhancement; Adaptive and robust control techniques for energy optimization and conversion.  He is a Data Science Fellow with the eScience Institute at UW.

Bernd R. Noack is Director of Research CNRS at LIMSI-CNRS, Paris-Saclay, and Professor and Chair of 'Flow Modeling and Control' at TU Braunschweig, Germany. Prof. Noack develops closed-loop flow control solutions for cars, airplanes and transport systems in an interdisciplinary effort with an international network of leading researchers. He received a degree as diplom physicist and his physics doctorate from the Georg-August-University Göttingen in 1989 and 1992, respectively. Positions followed at the Max-Planck-Institut für Strömungsforschung, Göttingen, the German Aerospace Center, Göttingen, the Göttingen University, the United Technologies Research Center (East Hartford, CT, USA) and the Berlin Institute of Technology, where he was Professor and Chair of 'Reduced-Order Modeling for Flow Control'. In 2009 he joined the Institute PPRIME, Poitiers, France as Director of Research CNRS. He also became Head of the Senior ANR Chair of Excellence ''Closed-Loop Control of Turbulent Shear Flows using Reduced-Order Models (TUCOROM)''. His work on turbulence  control was honored by national and international awards, including a Fellowship of the American Physical Society.