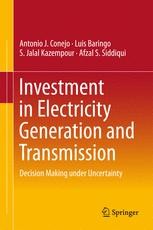 Investment in Electricity Generation and Transmission

This book provides an in-depth analysis of investment problems pertaining to electric energy infrastructure, including both generation and transmission facilities. The analysis encompasses decision-making tools for expansion planning, reinforcement, and the selection and timing of investment options.
In this regard, the book provides an up-to-date description of analytical tools to address challenging investment questions such as:

Written in a tutorial style and modular format, the book includes a wealth of illustrative examples to facilitate comprehension. It is intended for advanced undergraduate and graduate students in the fields of electric energy systems, operations research, management science, and economics. Practitioners in the electric energy sector will also benefit from the concepts and techniques presented here.
Show all
About the authors

Antonio J. Conejo, professor at Ohio State University, received his MS from MIT and his PhD from the Royal Institute of Technology, Sweden. He has published over 165 papers in SCI journals and has authored or coauthored books published by Springer, John Wiley, McGraw-Hill, and CRC. An IEEE Fellow, he has been the principal investigator in many research projects financed by public agencies and the power industry and has supervised 19 PhD theses.

Luis Baringo, assistant professor at the University of Castilla-La Mancha, Ciudad Real, Spain, received his Industrial Engineering degree and his PhD in Electrical Engineering from the University of Castilla-La Mancha, Spain, in 2009 and 2013, respectively. In 2014, he was a postdoctoral researcher at the Power Systems Laboratory, ETH Zurich, Switzerland.

Afzal S. Siddiqui, Senior Lecturer in the Department of Statistical Science at University College London, received the B.S. from Columbia University and the M.S. and Ph.D. from the University of California at Berkeley (all in industrial engineering and operations research). His research interests are in decision making under uncertainty in the energy sector. Besides having participated in several externally funded projects, he has coordinated an EU project on risk management and energy efficiency in public buildings. He also holds visiting positions at Stockholm University and Aalto University.