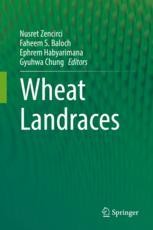 Landraces possess a very large genetic base in population structure and are dynamic populations of cultivated plants with historical origin, distinct identity, and without any formal crop improvement. They are often genetically diverse, locally adapted, and associated with traditional farming systems. Resistance genes to biotic and abiotic stress factors, which are especially diversified in landraces, are of great interest to plant breeders, faced with global climate challenge. In addition, gene pools made of different landraces grown in different ecological conditions can be used for wheat breeding to enhance quality; yield and other desirable agricultural parameters. An estimated 75% of the genetic diversity of crop plants was lost in the last century due to the replacement of high yielding modern varieties. There is, thus, an urgent need to preserve existing species, not only for posterity but also as a means to secure food supply for a rising world population. In this book, we provide an overview of wheat landraces with special attention to genetic diversities, conservation, and utilization.

Nusret Zencirci is a graduate of Çukurova University, Faculty of Agriculture, Department of Field Crops. He worked as a wheat breeder in the Central Research Institute for Field Crops, Ankara and served as a National and International Coordinator to National and International Wheat programs including Interntaional Winter Wheat Improvement Program. He is a professor now at Bolu Abant İzzet Baysal University, Science and Art Faculty, Biology Department, Bolu, Turkey. He is a member of various editorial boards in many  international journals. He is, with his team, breeder of 22 bread and durum wheat cultivars.  His research interests are Cereals, Biotic and Abiotic Stresses, Plant Genetic Resources, and Wheat Breeding.

Faheem Shehzad Baloch graduated from Bahuddin Zakariya University, Multan, Pakistan from where he got his Master of Agronomy in 2006 following a BSc (Hons) in agriculture in 2004 from the same university. He obtained his PhD from University of Çukurova, Adana, Turkey in 2012. He started his career as na assistant professor at Niğde Ömer Halis Demir university, Niğde Turkey in 2013. In 2015, he joined Bolu Abant Izzet baysal University, Bolu, Turkey, then to Science and Technological University, Sivas where he occupies the position of associate professor. In his current position, he is responsible but not limited to teaching and research activities and supervising MSc and PhD students. He supervised and graduated many MSc and PhD students as well as guided post doc fellows. He has experience in molecular plant breeding with good expertise in genomics, phenomics, population genetics, and biotechnology with special interest in cereals and legumes. He applies various genomics techniques to mine various genes of agricultural interest in the plant genetic resources and accelerate plant breeding through marker assisted selection and genomic prediction. He is the author of more 70 articles in international peer reviewed journals and authors of 8 book chapters. He also serves as member of editorial boards of many journals including Turkish journal of agricultural and forestry.

Ephrem Habyarimana is Chief Scientist and Research Scientist at CREA Research Center for Cereal and Industrial Crops, in Italy, European Union. He has documented skills and expertise in agricultural genetics, genomics, plant biochemistry, agronomy; with more than 25 years of research works in plant breeding with particular interest on cereals. He applies genomic prediction and selection, genome-wide association studies and marker-assisted selection models to expedite and enhance plant breeding. He develop and implements big data-driven modeling in support for crop monitoring, early within-season yields prediction and disease detection using satellite constellations, remote and proximal sensors, and artificial intelligence. In 2019, his genomic modelling analytics and machine learning technologies were classified, respectively, as promising Deep Tech by the European Commission’s Innovation Radar, and as one of the best technical advances in the field of Data Science and Artificial Intelligence by the European Data Science Awards 2019. His academic titles include but are not limited to Engineer in Agronomy, MSc in Crop Science, MSc in Biotechnology Studies, Master of Advanced Studies in Plant Biology, PhD Agricultural Genetics, and several other specialized studies. He trained in Europe, Africa, Asia, North America, and Latin America; he is fluent in more than five languages.

Gyuhwa Chung is a Distinguished Research Emeritus Professor at the Department of Biotechnology, Chonnam National University, Republic of Korea. He has documented skills and expertise in plant genetics, agricultural biotechnology, genomics, and agronomy with more than 30 years of work on related aspects in different plant species. He specialize in identification of genes and alleles associated with secondary metabolites i.e. isoflavones and soysaponins in different plant species, genetic diversity assessment of different plant species using DNA-molecular markers, risk assessment of transgenic crops, and characterization of cereal as well as legume crop plants. He has established international collaboration with research groups working on genetics and molecular control of floral organs in cereals and retrotransposon based taxonomic relationship evaluation of emmer. In addition to his work on cereals, he is a renowned in-situ (and ex-situ) germplasm conservationist and holds largest wild soybean collection in the word known as “Chung’s Wild Legume Germplasm Collection”. He has authored hundreds of research articles, book chapters and abstracts. He is a holder of several patents and has an extensive array of citations and reads /downloads to his papers. He has coordinated as a PI in over many scientific research and technology projects and has established worldwide collaborations. His interests in environmental protection are extended to risk assessment of genetically modified crop plants in relation to biodiversity, ecosystem and human health, and development of biosensors for onsite GMO detection.