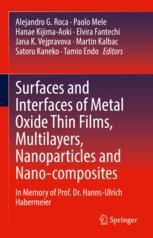 This book provides a general overview and current state of the art of different types of metal oxide nanomaterials, either in nanoparticles or thin film structure. It covers from the development and optimization of different nanofabrication/synthesis techniques for nanostructures which are currently the attention of the research community, the study of the structure and interactions by different characterization techniques of heterostructured materials and the final impact in different applications such as nanotherapy, data storage, super magnets, high-frequency devices. The book’s 13 chapters provide deep insight into the intriguing science of oxide materials and include contributions on novel technologies to fabricate nanomaterials with a broad range of functional properties (semiconducting, magnetic, ferroelectric, thermoelectric, optical, flexible and mechanical).  This book is intended to the experts for consolidation of their knowledge but also for students who aim to learn and get basics of nanostructured metal oxides in diverse forms.

Alejandro G. Roca is currently working at the Catalan Institute of Nanoscience and Nanotechnology (ICN2) in Barcelona (Spain). During his research career he has worked in different research centres from Spain (ICMM, INA-UNIZAR, ICMA), United Kingdom (University of York) and Japan (Tohoku University), and also in the private sector (Liquids Research Ltd). The nature of his research spans two research lines related with magnetic iron oxide- based nanoparticles. His main research line is the development of novel nanofabrication methodologies of magnetic-based nanoparticles for biomedicine with an accurate control over the size, shape and interphase features. His target materials range from hybrid heterostructures with magnetic and optical domains where the heterostructure has the properties of both domains plus the ones arising from the interaction of both domains, and anisotropic magnetic nanoparticles like magnetite nanocubes or nanorods, with direction-dependent properties. He is focused on the evaluation of these nanomaterials for their performance in theranostic application (contrast agents in different imaging techniques or nanoheters in magnetic and/or optical hyperthermia). Dr. Roca is also focused on the study of the structure and magnetism of magnetic-based nanostructures. During this study, he combines different lab-scale techniques together with synchrotron/neutron techniques that lead to the complete understanding of the structure and magnetism of nanomaterials.

Elvira Fantechi graduated in Chemistry at the University of Florence, and obtained the Ph.D degree in Material Science and Engineering at the same institution. She is currently Postdoc Researcher at the Department of Chemistry of the University of Pisa (Italy). Her research activity is in the fields of nanomagnetism and magnetoplasmonics, and it is mainly focused on the synthesis and characterization of the structural, optical and magnetic properties of novel nanomaterials based on transition metals oxides or metal particles. Her interests are devoted to the development of biocompatible magnetic and magnetic-plasmonic nanomaterials for biomedical applications and magnetic-plasmonic nanostructures for high-sensitivity sensors.

Hanae Kijima-Aoki is currently working as Assistant Professor at the Frontier Research Institute for Interdisciplinary Sciences of the Tohoku University (Sendai, Japan). She got her PhD at the Graduate School, Division of Engineering of the Tohoku University. Her topics cover the electrical and electronic engineering materials focusing on high frequency electric devices, soft magnetic thin films and Nano-hetero structured materials. She belongs to The Magnetics Society of Japan and the Japan Institute of Metals and Materials.

Satoru Kaneko is a group leader at KISTEC (Kanagawa Institute of Industrial Technology and Science), and a visiting researcher at Tokyo Institute of Technology. He received B.S. at Tokyo Metropolitan Univ., M.S.at Univ. of Arizona, and PhD. at Tokyo Institute of Technology. His study focuses on synthesis of functional materials of oxides, superconductor, and graphite related materials, and also interested in fabrication of nano structure, for example, self-organisation of periodic nanostructure by laser scanning. He spends weekend with road bike and joking, and enjoys making bacon and beer in back yard.

Tamio Endo holds Ph.D. (Kyoto University, Japan) and MsD (Gifu University, Japan) degrees. He is Emeritus Professor at Mie University (Japan), Gifu University Special Researcher (Japan), Honorary Professor of Southwest Jiaotong University (China), Visiting Researcher at University of California (San Diego,1995) (USA). He is currently Special Adviser – Japan Advanced Chemicals, Atsugi, (Japan) after Gifu University Special Researcher (Japan). His research interests include oxide thin films, heterostructures, plasma effects and bonding of polymer films. He has been part of many international academic projects such as Japan-India Cooperative Science Program. He has been organizer and plenary speaker of many of international conferences and has given many foreign university guest talks. He is keeping a Representative of .

Jana K. Vejpravova is currently working at the Department of Condensed Matter Physics, Charles University in Prague (Czech Republic) as an associate professor and senior group leader. After receiving her Ph.D. in condensed matter physics from the Charles University (2007), she worked in research institutions in Belgium (University of Hasselt) and Japan (NIMS, Tsukuba). In 2011 – 2016 she headed a Department of Magnetic Nanostructures at the Institute of Physics, Czech Academy of Sciences. Her research interests covers various aspects of structure and magnetism in solids including heavy fermions, magnetic nanoparticles, and carbon nanotubes. Currently, her research activities focus on magnetic field assisted chemical synthesis and development of advanced spectroscopic techniques, such as cryo-magnetic and high-frequency magnetic field photoluminescence and Raman spectroscopies. So far, she published over 150 publications, which received ~ 1700 citations (h-index = 20) and managed ~ 10 large national and international projects as a principal investigator. Her work has been recognized by several prestigious awards, i.e. Bolzano foundation award (2008), Award by the Minister of Education, Youth and Sports (2008), Scopus/Elsevier award (2010), Otto Wichterle award (2014), and ERC Starting grant (2017).

Martin Kalbac graduated in inorganic chemistry from Charles University, Prague, Czech Republic, (1998), where he also received his Ph.D. degree in 2002. Since 2001 he has worked at the J. Heyrovsky Institute of Physical Chemistry of the Academy of Sciences of the Czech Republic. Currently, he is a vice-director of the institute and the head of the Department of Low dimensional Systems. His research interests include carbon nanotubes, graphene, Raman spectroscopy and spectroelectrochemistry, isotope engineering of carbon nanostructures and sensorics.

Paolo Mele is currently Professor at SIT Research laboratories, Shibaura Institute of Technology, Tokyo, Japan. He obtained a Master degree in Chemistry and Ph.D. in Chemical Sciences at Genova University (Italy). In 2003 he moved to ISTEC-SRL in Tokyo to study melt-textured ceramic superconductors. Then he worked as postdoc at Kyoto University (JSPS fellowship) from 2004 to 2007, at Kyushu Institute of Technology (JST fellowship) from 2007 to 2011, at Hiroshima University (as lecturer) from 2011 to 2014 and at Muroran Institute of Technology (as associate professor) from 2015 to 2018 before reaching his current position. His research interests include materials for energy and sustainable development (superconductors and thermoelectrics); fabrication and characterization of thin films of oxides, ceramics and metals; study of the effect of nanostructuration on the physical properties; thermal transport; and vortex matter. He is the author of more than 100 papers in international scientific journals and four book chapters, and has two patents and has contributed to hundreds of communications at international conferences. He edited three books for Springer.