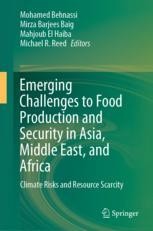 Emerging Challenges to Food Production and Security in Asia, Middle East, and Africa

Dr. Mohamed Behnassi is Professor at the College of Law, Economics, and Social Sciences, Ibn Zohr University of Agadir, Morocco. He is a Senior Researcher of international law and politics of environment and human security. He holds a PhD in International Environmental Law and Governance (Hassan II University of Casablanca, 2003) and a Diploma in International Environmental Law and Diplomacy (University of Eastern Finland and UNEP, 2015). He is currently the Founding Director of the Center for Environment, Human Security and Governance (CERES) – Former North-South Center for Social Sciences (NRCS). From 2015 to 2018, he was the Director of the Research Laboratory for Territorial Governance, Human Security and Sustainability (LAGOS) in the same university. Recently, he was appointed as Expert Evaluator for the National Center for Scientific and Technical Research (CNRST/Morocco), and selected as Expert by the Intergovernmental Science-Policy Platform on Biodiversity and Ecosystem Services (IPBES) and the Mediterranean Experts on Climate and Environmental Change (MEDECC) to take part in global and regional assessments, respectively. Accordingly, he is among the Lead Authors who elaborate the 1st Assessment Report (MAR1): Climate and Environmental Change in the Mediterranean Basin - Current Situation and Risks for the Future (MEDECC, 2021). Dr. Behnassi has published considerable number of scientific papers and book chapters in addition to 15 books, including Human and Environmental Security in the Era of Global Risks (Springer, 2019); Climate Change, Food Security and Natural Resource Management: Perspectives from Africa, Asia and the Pacific Islands (Springer, 2019); Environmental Change and Human Security in Africa and the Middle East (Springer, 2017). He organized as well many international conferences covering the above research areas and managed many research and expertise projects on behalf of various national and international organizations. Dr. Behnassi is regularly requested to provide scientific expertise nationally and internationally. Other professional activities include social compliance auditing and consultancy by monitoring human rights at work and the sustainability of the global supply chain.

Dr. Mirza Barjees Baig is Professor at the Prince Sultan Institute for Environmental, Water and Desert Research, King Saud University, Saudi Arabia. He earned his MS degree in International Agricultural Extension in 1992 from the Utah State University, Logan, Utah, USA and was placed on the ‘Roll of Honor’. He completed his Ph.D. in Extension for Natural Resource Management from the University of Idaho, USA and was honored with the ‘1995 outstanding graduate student award’. Dr. Baig has published extensively on the issues associated with natural resources in the national and international journals. He has also made oral presentations about agriculture and natural resources and role of extension education at various international conferences. Food waste, water management, degradation of natural resources, deteriorating environment and their relationship with society/community are his areas of interest. He has attempted to develop strategies to conserve natural resources, promote environment and develop sustainable communities. Dr. Baig started his scientific career in 1983 as a researcher at the Pakistan Agricultural Research Council, Islamabad, Pakistan. He served at the University of Guelph, Ontario, Canada as the Special Graduate Faculty from 2000-2005. He served as a Foreign Professor at the Allama Iqbal Open University (AIOU), Pakistan through the Higher Education Commission from 2005-2009. He served as a Professor of Agricultural Extension and Rural Society at the King Saud University, Saudi Arabia from 2009-2020. He serves as well on the Editorial Boards of many international journals and the member of many international professional organizations.

Dr. Mahjoub El Haiba is Professor at the College of Law, Economics, and Social Sciences, Hassan II University of Casablanca, Morocco. He graduated from The Hague Academy of International Law, the Centre for Studies and Research in International Law and International Relations in 1984, and in 1994 he had a State Doctorate in Public Law and Political Science from the same University. Dr. El Haiba held many academic and official positions, including being: Former Member of the National Consultative Human Rights Council (2002-2010), and his Secretary General (2005-2010); first Inter-ministerial Delegate for Human Rights (March 2011-December 2018); former Member ex officio of the Higher Council for Education, Training and Scientific Research, and of its Executive Office; nominated Member of The Equity and Reconciliation Instance (IER) (2004-2005); former and current Member of the United Nations’ Human Rights Committee (2008-2011/2020-at present); former Member and President of the Jury to the League of Arab States’ Environment Award, Cairo; former Member and President of the Jury to the Hassan II Environment Award; former Member of the Jury to the Kingdom of Saudi Arabia’s Award on Environmental Administration; Founding Member of the Moroccan Human Rights Organization (OMDH); Founding Member of the Arab Network for Environment and Development (RAED), Cairo; Founding Member of the Center for Studies on Migration, Faculty of Law, Economics, and Social Sciences, Hassan II University of Casablanca; and former Deputy-Dean of the same Faculty. His areas of teaching, research, and expertise include human rights, transitional justice, and environmental law. He has a publication record in these areas, supervised numerous Doctorate and Master theses, and made many presentations in national and international scientific meetings.

Dr. Michael R. Reed is Emeritus Professor of Agricultural Economics at the University of Kentucky, USA. He holds a Ph.D. in economics from Iowa State University (1979); a Doctor Honoris Causa (Honorary Ph.D) from Bucharest University of Agricultural Sciences and Veterinary Medicine (Romania); and an Honorary Ph.D. from the Faculty of Business Administration, Maejo University (Thailand). Dr. Reed’s principal area of research is international trade in agricultural products, including the effects of macroeconomic policies and exchange rates on U.S. food exports, international commodity price dynamics, consumer demand in various countries, and the effects of competition patterns on world agricultural trade patterns.