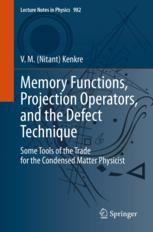 Some Tools of the Trade for the Condensed Matter Physicist

This book provides a graduate-level introduction to three powerful and closely related techniques in condensed matter physics: memory functions, projection operators, and the defect technique. Memory functions appear in the formalism of the generalized master equations that express the time evolution of probabilities via equations non-local in time, projection operators allow the extraction of parts of quantities, such as the diagonal parts of density matrices in statistical mechanics, and the defect technique allows solution of transport equations in which the translational invariance is broken in small regions, such as when crystals are doped with impurities. These three methods combined form an immensely useful toolkit for investigations in such disparate areas of physics as excitation in molecular crystals, sensitized luminescence, charge transport, non-equilibrium statistical physics, vibrational relaxation, granular materials, NMR, and even theoretical ecology. This book explains the three techniques and their interrelated nature, along with plenty of illustrative examples. Graduate students beginning to embark on a research project in condensed matter physics will find this book to be a most fruitful source of theoretical training.

V. M. (Nitant) Kenkre is Distinguished Professor (Emeritus) of Physics at the University of New Mexico (UNM), USA, retired since 2016. His undergraduate studies were at IIT, Bombay (India) and his graduate work took place at SUNY Stony Brook (USA). He was elected Fellow of the American Physical Society in 1998, Fellow of the American Association for Advancement of Science in 2005 and has won an award from his University for his international work. He was the Director of two Centers at UNM: the Center for Advanced Studies for 4 years and then the Founding Director of the Consortium of the Americas for Interdisciplinary Science for 16 years. He was given the highest faculty research award of his University in 2004 and supervised the Ph.D. research of 25 doctoral scientists and numerous postdoctoral researchers.

Through 270 published papers, his research achievements include formalistic contributions to non- equilibrium statistical mechanics, particularly quantum transport theory, observations in sensitized luminescence and exciton/electron dynamics in molecular solids, and solutions to cross-disciplinary puzzles arising in spread of epidemics, energy transfer in photosynthetic systems, statistical mechanics of granular materials, and the theory of microwave sintering of ceramics.

He has interests in comparative religion, literature and visual art, and has often lectured on the first of  these. His most recent coauthored book is Theory of the Spread of Epidemics and Movement Ecology of Animals (Cambridge University Press, 2020). He has also coauthored a book on exciton dynamics (Springer, 1982), coedited another on modern challenges in statistical mechanics (AIP, 2003), and published a book on his poetry entitled Tinnitus, and two on philosophy: The Pragmatic Geeta, and What is Hinduism.