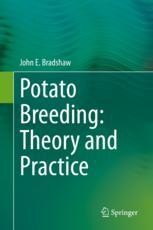 The potato (Solanum tuberosum) is the world’s fourth most important food crop after maize, rice and wheat with 377 million tonnes fresh-weight of tubers produced in 2016 from 19.2 million hectares of land, in 163 countries, giving a global average yield of 19.6 t ha-1 (http://faostat.fao.org). About 62% of production (234 million tonnes) was in Asia (191), Africa (25) and Latin America (18) as a result of steady increases in recent years, particularly in China and India. As a major food crop, the potato has an important role to play in the United Nations “2030 Agenda for Sustainable Development” which started on 1 January 2016 (http://faostat.fao.org). By 2030 the aim is to “ensure access by all people, in particular the poor and people in vulnerable situations, including infants, to safe, nutritious and sufficient food all year round”. By then, the world population is expected to reach 8.5 billion and continue to increase to 9.7 billion in 2050. For potatoes, the need is to increase production and improve nutritional value during a period of climate change, a key aspect of which will be the breeding of new cultivars for a wide range of target environments and consumers.

The aim of the book is to help this endeavour by providing detailed information in three parts on both the theory and practice of potato breeding. Part I deals with the history of potato improvement and with potato genetics. Part II deals with breeding objectives, divided into improving yield, quality traits and resistance to the most important diseases and pests of potatoes. Part III  deals with breeding methods: first, the use of landraces and wild relatives of potato in introgression breeding, base broadening and population improvement; second, breeding clonally propagated cultivars as a way to deliver potato improvement to farmers’ fields; third, as an alternative, breeding potato cultivars for propagation through true potato seed; and fourth, gene editing and genetic transformation as ways of making further improvements to already successful and widely grown cultivars. Included are marker-assisted introgression and selection of specific alleles, genomic selection of many unspecified alleles and diploid F1 hybrid breeding.

John Bradshaw spent the whole of his 34-year career (1975-2009) as a plant breeder and geneticist at what is now the James Hutton Institute in Dundee, Scotland; having studied genetics and applied genetics in England at the Universities of Cambridge (BA), Birmingham (MSc) and East Anglia (PhD). He is currently an Honorary Associate of the James Hutton Institute. He worked on barley, brassicas (kale, swedes and turnips) and potatoes; doing research on the applications of genetics to plant breeding as well as breeding finished cultivars.  He was particularly interested in methods of kale population improvement, the genetic basis of hybrid vigour in swedes, the theory and practice of linkage and QTL analysis in tetraploid potatoes, and breeding for quantitative resistance to pests and diseases (clubroot in kale, powdery mildew in swedes, and late blight and cyst nematodes in potatoes). He has written extensively on plant breeding and genetics and is widely travelled. He has been an Honorary Fellow of the Indian Potato Association since 2008. In 2010 he received the British Potato Industry Award in recognition of his contribution to potato research and knowledge transfer. Throughout his career he was a member of EUCARPIA, the European Association for Research on Plant Breeding, and having served as Chairperson of the Section Potatoes was made an honorary member in May 2012. He is a member of EAPR, the European Association for Potato Research, and has been Co-ordinating Editor of their journal Potato Research since December 2017. His previous book Plant Breeding: Past, Present and Future was published by Springer in 2016.