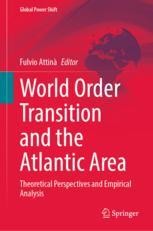 This book examines the current phase of world order transition in the Atlantic area, focusing on Europe and Northern America, Asia, and Africa. In particular, it describes four processes of world order transition, namely the decreasing American leadership, the rising power of China, the receding effectiveness of economy and security world policies, and the continued but inadequate operation of the world policy-making institutions.

Part one of the book presents perspectives on world order transition developed by political science schools, i.e. the world hegemony and the power transition school, and by the experts of complexity theory, a newcomer in social sciences. These theories are best suited to explain the order transition and to supply consistent, complementary data and insights on the juncture of the four processes pushing for the creation of the new world order.

Part two looks into the impact of order transition on the Atlantic area. The authors focus on the existing tensions and the potentials for change that affect the long-time relations between the USA, the European countries, and Canada. At the same time, the interference of China into the politics and economy of Europe is analyzed, in particular through a case study of the relations between China and the Baltic states.

Fulvio Attinà is Professor Emeritus of Political Science and International Relations, and Jean Monnet Chair Ad Personam at the University of Catania, Italy. Attinà is a former Chair of the Italian Association of Political Science (SISP). Furthermore, he served in the governing bodies of ECPR, ISA and the Italian ECSA. His research focuses on world order transition, the EU’s management of the migration crisis, multilateral security, and humanitarian and emergency actions.