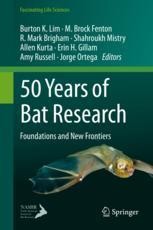 With more than 1,400 species, bats are an incredibly diverse and successful group of mammals that can serve as model systems for many unique evolutionary adaptations. Flight has allowed them to master the sky, while echolocation enables them to navigate in the dark. Being small, secretive, nocturnal creatures has made bats a challenge to study, but over the past 50 years, innovative research has made it possible to dispel some of the mystery and myth surrounding them to give us a better understanding of the role these animals play in the ecosystem.

The structure of the book is based on several broad themes across the biological sciences, including the evolution of bats, their ecology and behavior, and conservation of biodiversity. Within these themes are more specific topics on important aspects of bat research, such as morphology, molecular biology, echolocation, taxonomy, systematics, threats to bats, social structure, reproduction, movements, and feeding strategies.

Given its scope, the book will appeal to the wider scientific community, environmental organizations, and government policymakers who are interested in the interdisciplinary aspects of biology and nature.

Burton Lim is an Assistant Curator of Mammalogy at the Royal Ontario Museum in Toronto, Canada.  Holding a Ph.D. in ecology and evolutionary biology from the University of Toronto, his research interests are in the biodiversity and evolution of mammals with a particular focus on neotropical bats. Burton is currently the chair of the board of directors of the North American Society for Bat Research.

Brock Fenton is a Professor Emeritus at the Department of Biology at Western University.  He received a Ph.D. in zoology from the University of Toronto.  His research involves using bats to explore the interfaces between animal behavior, ecology and evolution. Brock is the author or editor of several books, including Bat Bioacoustics with Springer.

Mark Brigham is a Professor of Biology at the Department of Biology, University of Regina. Holding a Ph.D. from York University (1988), his research focuses on the behavior and ecology of bats and nightjars (nocturnal insect-eating birds). He is one of two co-editors of the Canadian Journal of Zoology.

Shahroukh Mistry is an Adjunct Professor of biology at California State University Chico and Professor of biology at Butte College.  He received his Ph.D. in ecology from the University of New Mexico.  His latest research project involves acoustic monitoring of bat diversity and activity in northern California.  Shahroukh is currently an associate program director for the North American Society for Bat Research.

Allen Kurta is a Professor at the Biology Department, Eastern Michigan University.  He received his Ph.D. from Boston University.  His research interests are in the ecology, behavior, and natural history of mammals, with an emphasis on bats.  Al is past chair of the board of directors of the North American Society for Bat Research.

Erin Gillam is an Associate Professor at the Department of Biological Sciences, North Dakota State University.  She received her Ph.D. in ecology and evolutionary biology from the University of Tennessee-Knoxville in 2007.  Dr. Gillam’s research focuses on the bioacoustics of bats, including echolocation and social calling. She also has an active research program focused on the conservation of bats in the Northern Great Plains of the United States.

Amy Russell is an Associate Professor at the Department of Biology, Grand Valley State University.  She received a Ph.D. in ecology and evolutionary biology from the University of Tennessee.  Her research interests lie at the intersection of multiple fields: where phylogenetic and population genetic approaches can inform questions of recent speciation, where coalescent approaches can help to discriminate among biogeographic hypotheses, and where molecular ecology and simulation-based analyses can discriminate among demographic scenarios.

Jorge Ortega is a Professor at the Departamento de Zoología, Instituto Politécnico Nacional in Mexico City.  Holding a Ph.D. in ecology from the Universidad Nacional Autonóma de México, his research interests are in the eco-immunogenetics, behavioral ecology, and molecular biology of bats.  He is the editor of several books, including Sociality in Bats by Springer.