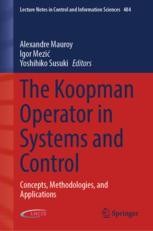 The Koopman Operator in Systems and Control

This book provides a broad overview of state-of-the-art research at the intersection of the Koopman operator theory and control theory. It also reviews novel theoretical results obtained and efficient numerical methods developed within the framework of Koopman operator theory.
The contributions discuss the latest findings and techniques in several areas of control theory, including model predictive control, optimal control, observer design, systems identification and structural analysis of controlled systems, addressing both theoretical and numerical aspects and presenting open research directions, as well as detailed numerical schemes and data-driven methods. Each contribution addresses a specific problem. After a brief introduction of the Koopman operator framework, including basic notions and definitions, the book explores numerical methods, such as the dynamic mode decomposition (DMD) algorithm and Arnoldi-based methods, which are used to represent the operator in a finite-dimensional basis and to compute its spectral properties from data. The main body of the book is divided into three parts:

A useful reference resource on the Koopman operator theory for control theorists and practitioners, the book is also of interest to graduate students, researchers, and engineers looking for an introduction to a novel and comprehensive approach to systems and control, from pure theory to data-driven methods.

Alexandre Mauroy received the M.S. degree in Aerospace Engineering and the Ph.D. degree in Applied Mathematics from the University of Liège, Liège, Belgium, in 2007 and 2011, respectively. He was a BAEF Research Fellow at the University of California, Santa Barbara, CA, USA, from 2011 to 2013, a postdoctoral researcher at the University of Liège from 2013 to 2015, and a research associate at the University of Luxembourg, Luxembourg, in 2016. He is currently Assistant Professor at the Department of Mathematics at the University of Namur, Belgium and member of the Namur Center for Complex Systems (naXys). His research interests include synchronization in complex networks, network identification, and applications of operator theoretic methods to dynamical systems and control.
Igor Mezic works in the field of dynamical systems and control theory and applications to energy efficient design and operations and complex systems dynamics. He did his Dipl. Ing. in Mechanical Engineering in 1990 at the University of Rijeka, Croatia and his Ph. D. in Applied Mechanics at the California Institute of Technology. He was a postdoctoral researcher at the Mathematics Institute, University of Warwick, UK in 1994-95. From 1995 to 1999 he was a member of Mechanical Engineering Department at the University of California, Santa Barbara where he is currently a Professor. In 2000-2001 he has worked as an Associate Professor at Harvard University in the Division of Engineering and Applied Sciences. Dr. Mezic won the Alfred P. Sloan Fellowship, NSF CAREER Award from the NSF and the George S. Axelby Outstanding Paper Award on ”Control of Mixing” from IEEE. He also won the United Technologies Senior Vice President for Science and Technology Special Achievement Prize in 2007. He is a Fellow of the American Physical Society and a Fellow of the Society for Industrial and Applied Mathematics. He was an Editor of Physica D: Nonlinear Phenomena and an Associate Editor of the Journal of Applied Mechanics and SIAM Journal on Control and Optimization. Mezic is the Director of the Center for Energy Efficient Design and Head of Buildings and Design Solutions Group at the Institute for Energy Efficiency at the University of California, Santa Barbara. His research interest centers around the use of spectral theory of Koopman operators in dynamical systems and control.
Yoshihiko Susuki received his Ph.D. in Electrical Engineering from Kyoto University, Kyoto, Japan, 2005. From 2005 to 2016, he was a faculty member of the Department of Electrical Engineering at Kyoto University, Japan. Since 2016, he is a faculty member of the Department of Electrical and Information Systems at Osaka Prefecture University, Sakai, Japan, where he is an Associate Professor. From 2008 to 2010, he was a Visiting Research Fellow of the Department of Mechanical Engineering at the University of California, Santa Barbara, United States, as a Postdoctoral Fellow of JSPS. He was a Principal Investigator of JST-CREST project on cooperative distributed energy management systems from 2012 to 2015. From 2019, he is a PREST Researcher of JST project on mathematical structures in real/virtual-world objects and their utilization. He is an Associate Editor of Asian Journal of Control and Nonlinear Theory and Its Applications, IEICE. His research interests include nonlinear dynamical systems, power and energy engineering, and control systems technology.