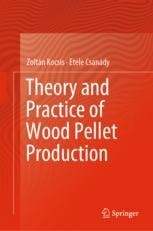 In the agriculture, forestry, the primary and secondary wood working industry there are considerable resources of raw materials which can only be used in a rational manner for energetic purposes. Due to requirements from the users. one of the most retinal way of utilization is to make pellets with high density and specific energy content. Making pellets of 6-8 mm diameter, their utilization in furnaces allows an almost fully automated operation with high thermal efficiency. This book describes both the theoretical and practical aspects of pellet production including material requirements and preparation, pressing  technologies, quality requirements, burning properties, investments and the overall economy of pellet production.