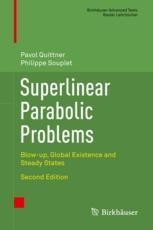 This book is devoted to the qualitative study of solutions of superlinear elliptic and parabolic partial differential equations and systems. This class of problems contains, in particular, a number of reaction-diffusion systems which arise in various mathematical models, especially in chemistry, physics and biology.

The first two chapters introduce to the field and enable the reader to get acquainted with the main ideas by studying simple model problems, respectively of elliptic and parabolic type. The subsequent three chapters are devoted to problems with more complex structure; namely, elliptic and parabolic systems, equations with gradient depending nonlinearities, and nonlocal equations. They include many developments which reflect several aspects of current research. Although the techniques introduced in the first two chapters provide efficient tools to attack some aspects of these problems, they often display new phenomena and specifically different behaviors, whose study requires new ideas. Many open problems are mentioned and commented.

The book is self-contained and up-to-date, it has a high didactic quality. It is devoted to problems that are intensively studied but have not been treated so far in depth in the book literature. The intended audience includes graduate and postgraduate students and researchers working in the field of partial differential equations and applied mathematics.

The first edition of this book has become one of the standard references in the field. This second edition provides a revised text and contains a number of updates reflecting significant recent advances that have appeared in this growing field since the first edition.

Pavol Quittner is Full Professor of Mathematics at the Comenius University in Bratislava. He received his PhD in Mathematics from the Charles University in Prague in 1987. His research interests focus on nonlinear partial differential equations.