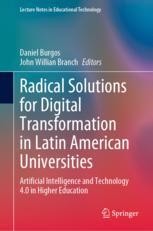 This book presents how Digital Transformation is a requirement to upgrade Latin American universities to a next level in management, lecturing and learning processes and strategies. The book starts with a thorough introduction of the Latin American context addressing the three main topics in the book: Digital Transformation, Higher Education and Artificial Intelligence & Industry 4.0. They will be depicted by region, with a clear distribution between Central America & Mexico, Comunidad Andina (Perú, Colombia, Chile, Ecuador, Bolivia), Mercosur (Argentina, Brasil, Paraguay and Uruguay), and other countries.

The book also shows how online learning is a key part of the transformation, with a clear focus on learning management systems, innovation and learning analytics. Further, personalised services for every single profile at the university (students, lecturers, academic managers) are presented to guarantee inclusive education service aggregation for networked campuses. Following, the book addresses strategy and overall services that concentrate on sustainability and revenue models integrated with a strategic planning.

Finally a set of chapters will show specific experiences and case studies of direct application of Artificial Intelligence and Technology 4.0, where the readers can learn from and transfer directly into their educational contexts.

Daniel Burgos works as a Full Professor of Technologies for Education & Communication and Vice-rector for International Research, at Universidad Internacional de La Rioja (UNIR). He holds a UNESCO Chair on eLearning and the ICDE Chair in Open Educational Resources. He is the Director of the Research Institute for Innovation & Technology in Education (UNIR iTED). He has implemented more than 60 European and Worldwide R&D projects, and published over 180 research papers and over 25 books. He is a Professor at An-Najah National University (Palestine), an Adjunct Professor at Universidad Nacional de Colombia (UNAL, Colombia), an Extraordinary Professor at North-West University (South-Africa) and a Visiting Professor at Coventry University (United Kingdom). He works as a consultant for United Nations (UNECE), European Commission & Parliament, and the Russian Academy of Science. He holds degrees in Communication (PhD), Computer Science (Dr. Ing), Education (PhD), Anthropology (PhD), Business Administration (DBA), Theology (PhD), Management (PhD), Open Science and STEM (PhD) and Artificial Intelligence (MIT, postgraduate).