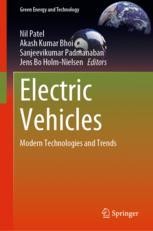 Mr. Nil Patel received the Bachelors of Engineering (B.E.) in Electrical and Electronics Engineering from the Gujarat Technological University, Gujarat, India, in 2014, and the Master of Technology (M.Tech.) degree (Hons.) in Electrical Engineering with specialization in Power Electronics, Machines and Drives from Institute of Technology, Nirma Universty, India, in 2016. During his master studies, he was graduate research project student at Hitachi, Gandhinagar, India, from 2015-2016. He was awarded the Gold Medal for securing highest academic standing for his bachelors studies. He is currently working as Research Engineer in Research and Development Department (Power Electronics and Drives) at Cismac Solution Pvt. Ltd, Ahmedabad, India. From July 2016 to January 2017, he was a Lecturer in Electrical Engineering Department at Institute of Technology, Ganpat University, Gujarat, India. From January 2017 to December 2017, he was an Assistant Professor and Faculty-in charge of Power Electronics and Drives Research Laboratory in Electrical Engineering Department at Institute of Technology, Ganpat University, Gujarat, India. His current research interests include power electronics converters, converter control techniques, advanced electrical machines, motor-drives, renewable energy and transportation electrification. He is regular reviewer for multiple IEEE Transactions, Conferences and IET journals.

Dr. Akash Kumar Bhoi working as Assistant Professor in the Department of Electrical and Electronics Engineering at Sikkim Manipal Institute of Technology (SMIT), SMU, India. He has specialized in the field of Biomedical Engineering and Renewable Energy.  His areas of research are Biomedical Signal Processing, Renewable Energy, Computational Approaches and Patter Recognition etc.. He is also a regular reviewer of journals of repute namely IEEE, Springer, Elsevier, Taylor and Francis, Inderscience etc. He has published several papers in national and international journals and conferences. He has also served on numerous organizing panels for the international conferences and workshops. He is currently editing several books with Springer Nature and serving as Guest editor for special issues of the journal like Springer Nature and Inderscience.

Sanjeevikumar Padmanaban (Member’12–Senior Member'15, IEEE) received the bachelor's degree in electrical engineering from the University of Madras, Chennai, India, in 2002, the master's degree (Hons.) in electrical engineering from Pondicherry University, Puducherry, India, in 2006, and the PhD degree in electrical engineering from the University of Bologna, Bologna, Italy, in 2012. He was an Associate Professor with VIT University from 2012 to 2013. In 2013, he joined the National Institute of Technology, India, as a Faculty Member. In 2014, he was invited as a Visiting Researcher at the Department of Electrical Engineering, Qatar University, Doha, Qatar, funded by the Qatar National Research Foundation (Government of Qatar). He continued his research activities with the Dublin Institute of Technology, Dublin, Ireland, in 2014. Further, he served an Associate Professor with the Department of Electrical and Electronics Engineering, University of Johannesburg, Johannesburg, South Africa, from 2016 to 2018. Since 2018, he has been a Faculty Member with the Department of Energy Technology, Aalborg University, Esbjerg, Denmark. He has authored more than 300 scientific papers.S. Padmanaban was the recipient of the Best Paper cum Most Excellence Research Paper Award from IET-SEISCON'13, IET-CEAT'16, IEEE-EECSI'19, IEEE-CENCON'19 and five best paper awards from ETAEERE'16 sponsored Lecture Notes in Electrical Engineering, Springer book. He is a Fellow of the Institution of Engineers, India, the Institution of Electronics and Telecommunication Engineers, India, and the Institution of Engineering and Technology, U.K. He is an Editor/Associate Editor/Editorial Board for refereed journals, in particular the IEEE SYSTEMS JOURNAL, IEEE Transaction on Industry Applications, IEEE ACCESS, IET Power Electronics, IET Electronics Letters, and Wiley-International Transactions on Electrical Energy Systems, Subject Editorial Board Member – Energy Sources – Energies Journal, MDPI, and the Subject Editor for the IET Renewable Power Generation, IET Generation, Transmission and Distribution, and FACTS journal (Canada).

Jens Bo Holm-Nielsen currently works at the Department of Energy Technology, Aalborg University and Head of the Esbjerg Energy Section. On this research, activities established the Center for Bioenergy and Green Engineering in 2009 and serve as the Head of the research group. He has vast experience in the field of Biorefinery concepts and Biogas production–Anaerobic Digestion. Implementation projects of Bio-energy systems in Denmark with provinces and European states. He served as the technical advisory for many industries in this field. He has executed many large-scale European Union and United Nations projects in research aspects of Bioenergy, biorefinery processes, the full chain of biogas and Green Engineering. He has authored more than 300 scientific papers. He was a member on the invitation with various capacities in the committee for over 500 various international conferences and Organizer of international conferences, workshops and training programmes in Europe, Central Asia and China. Focus areas Renewable Energy - Sustainability - Green jobs for all.