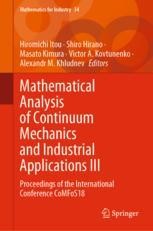 Proceedings of the International Conference CoMFoS18

This book focuses on mathematical theory and numerical simulation related to various areas of continuum mechanics, such as fracture mechanics, (visco)elasticity, optimal shape design, modelling of earthquakes and Tsunami waves, material structure, interface dynamics and complex systems. Written by leading researchers from the fields of applied mathematics, physics, seismology, engineering, and industry with an extensive knowledge of mathematical analysis, it helps readers understand how mathematical theory can be applied to various phenomena, and conversely, how to formulate actual phenomena as mathematical problems.
This book is the sequel to the proceedings of the International Conference of Continuum Mechanics Focusing on Singularities (CoMFoS) 15 and CoMFoS16.

Hiromichi Itou is Associate Professor in the Department of Mathematics at the Tokyo University of Science. He is a representative member of The Japan Society for Industrial and Applied Mathematics (JSIAM). His research interests lie in the areas of Fracture Mechanics, Singular integral equations, Analysis of singularities of corner and crack, theory of elasticity, Inverse problems.


Shiro Hirano is Assistant professor in the College of Science and Engineering at the Ritsumeikan University. His research interests lie in the areas of Mathematical modeling of earthquake fault mechanics, Data analysis of seismicity, Laboratory seismology, Earthquake engineering.


Victor A. Kovtunenko, PhD (1997), Habilitation (2007) is working at the Lavrentyev Institute of Hydrodynamics of the Siberian Division of the Russian Academy of Sciences, and at the Austrian Academy of Sciences (OeAW). He currently serves as a Project Leader of the Austrian Science Foundation (FWF) at the Institute for Mathematics and Scientific Computing at the University of Graz. His research interests include variational inequalities, shape and topology optimization, nonsmooth and numerical optimization, applications to solid mechanics.


Alexandr M. Khludnev is a head of laboratory at the Lavrentyev Institute of Hydrodynamics of the Siberian Division of the Russian Academy of Sciences. Simultaneously he has a part time professor position at Novosibirsk State University. His research interests include variational inequalities, shape and topology optimization, crack problems, contact and free boundary problems in solid mechanics.