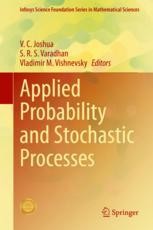 This book gathers selected papers presented at the International Conference on Advances in Applied Probability and Stochastic Processes, held at CMS College, Kerala, India, on 7–10 January 2019. It showcases high-quality research conducted in the field of applied probability and stochastic processes by focusing on techniques for the modelling and analysis of systems evolving with time. Further, it discusses the applications of stochastic modelling in queuing theory, reliability, inventory, financial mathematics, operations research, and more. This book is intended for a broad audience, ranging from researchers interested in applied probability, stochastic modelling with reference to queuing theory, inventory, and reliability, to those working in industries such as communication and computer networks, distributed information systems, next-generation communication systems, intelligent transportation networks, and financial markets.

V. C. JOSHUA is Associate Professor at the Department of Mathematics, CMS College, Kerala, India. He received his Ph.D. in Mathematics from the Cochin University of Science and Technology, Kerala, India, in 2003. His research interests include stochastic modelling analysis and applications, queuing theory, inventory, and reliability. An author of one book and around 30 research papers, Dr Joshua is a reviewer on a number of international journals. He has been a participating scientist of two international bilateral scientific research projects and has organized three international conferences on applied probability and stochastic processes.
S. R. S. VARADHAN is the Frank Jay Gould Professor of Science at Courant Institute of Mathematical Sciences, New York University, USA, and is a renowned mathematician known for his fundamental contributions to probability theory. He completed his Ph.D. in Mathematics from Indian Statistical Institute, Kolkata, India. Professor Varadhan is known for his fundamental contributions to probability theory and for creating a unified theory of large deviations. He is a recipient of the National Medal of Science (in 2010) from President Barack Obama, the highest honour bestowed by the Government of the United States of America on scientists, engineers, and inventors. The Government of India awarded him the Padma Bhushan (in 2008). He received the Abel Prize (in 2007) for his work on large deviations with Monroe D. Donsker. He was also awarded the Leroy P. Steele Prize for Seminal Contribution to Research (in 1996) from the American Mathematical Society for his work with Daniel W. Stroock on diffusion processes, Margaret and Herman Sokol Award of the Faculty of Arts and Sciences, New York University (in 1995), and Birkhoff Prize (in 1994). He also has two honorary degrees from Université Pierre et Marie Curie, Paris, France, and from Indian Statistical Institute, Kolkata, India.
Professor Varadhan is a member of the National Academy of Sciences, Washington, and the Norwegian Academy of Science and Letters, Oslo, Norway. He has been an elected Fellow of the American Academy of Arts and Sciences, Cambridge, U.S.A.; the World Academy of Sciences, Trieste, Italy; the Institute of Mathematical Statistics, Royal Society, London, U. K.; the Indian Academy of Sciences, Bangalore, India; the Society for Industrial and Applied Mathematics, Philadelphia, U.S.A., and American Mathematical Society, Providence, U.S.A. His areas of research include probability theory and its relation to analysis, various aspects of stochastic processes and their connections to certain classes of linear and nonlinear partial differential equations.
VLADIMIR M. VISHNEVSKY ​is Head of the Telecommunication Networks Laboratory at the V. A. Trapeznikov Institute of Control Sciences of Russian Academy of Sciences (ICS RAS), Moscow, Russia. Earlier, he was Assistant Head of the Institute of Information Transmission Problems of RAS, from 1990 to 2010, and Assistant Head of Laboratory with ICS RAS, from 1971 to 1990. He also served as Full Professor at ICS RAS from 1989 and the Moscow Institute of Physics and Technology from 1990. He earned his Ph.D. in queuing theory and telecommunication networks and D.Sc. in telecommunication networks from ICS RAS in 1974 and 1988, respectively.
Professor Vishnevsky has authored over 300 research papers in queuing theory and telecommunications, 10 monographs and 20 patents for inventions. His areas of research include computer systems and networks, queuing systems, telecommunications, discrete mathematics (extremal graph theory, mathematical programming) and wireless information transmission networks. He is a co-chair of a number of IEEE conferences and project leader of several international research projects related to the research and development of the next generation 5G/IMT-2020 networks. In 2019, by a decree of the President of the Russian Federation, Vladimir M. Vishnevsky was awarded the title "Honored Scientist of the Russian Federation".